HomeActivismTayebwa on the spot as parliament approves Shs 207bn for shares in...
ActivismAfricaDiaspora News

Parliament has in controversial circumstances approved the proposed government purchase of 150,000 preference shares in 52-year-old Roko Construction Limited worth Shs 207 billion amidst protests from a section of MPs. 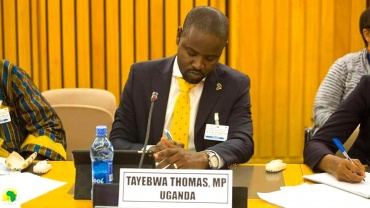 On Thursday, deputy speaker of parliament Thomas Tayebwa told MPs that he had received communication from the executive that if the government proposal is not approved by the House during the sitting, Roko would cease operations.

Before the MPs could even discuss Tayebwa’s communication, the deputy speaker put a question on the proposal and swiftly indicated that the ‘ayes’ had taken the day. This was amidst commotion on the floor with some MPs raising the issue of lack of quorum while others shouted that they had not taken a vote. Tayebwa immediately adjourned the House to Tuesday next week.

This left a section of MPs mainly from the opposition on their feet as the deputy speaker walked out of the chambers. These were seen with the leader of opposition (LoP), Mathias Mpuuga holding a short meeting in the chambers.

The development comes after a day when parliament, steered by speaker Anita Among stayed the approval of the proposed purchase of shares in Roko after the presentation of a report by the parliamentary finance committee and a minority report by Butambala County MP, Muhammad Kivumbi.

Both reports set conditions for the government to fulfill before the purchase of shares would be approved. In his report to parliament, Kiboga East MP Keffa Kiwanuka (NRM) also finance committee chairperson recommended that Roko should be expeditiously audited, as a condition precedent to signing the share subscription agreement (SSA), by the auditor general to particularly look at and certify the material assets, debtors, creditors, governance and management.

He cited inadequate and insufficient due diligence by the government, noting that the Uganda Development Corporation (UDC) which was requested in November 2019 to initiate the process of acquiring equity in Roko through the necessary valuation of the company was not allocated funds to do so.

“Whereas the committee is satisfied with Roko’s own assessment and government’s assessment based on its interface with Roko and Roko’s creditors, as a condition precedent if this bailout is agreed, the committee strongly recommends that Roko should be expeditiously audited by our auditor general. This would require that Shs 800 million is made available for this work,” said Kiwanuka.

Kiwanuka also recommended that the SSA be amended to include reporting arrangements to parliament on the performance of the company, after the bailout, every six months. He also said that the government prioritizes payments for all outstanding arrears to contractors and that payments for work executed by contractors are paid promptly, to mitigate the impact of cash flow constraints as a result of delayed payments.

Kiwanuka recommended that the government acquires the preference shares in Roko taking into consideration the different issues highlighted. To justify the purchase at Shs 1 million per nominal share, Kiwanuka Hnoted that Roko had undertaken the construction of several iconic buildings in Uganda including the Crested Towers, Workers House, Mapeera House, Acacia Mall, Rwenzori Towers and many others making it a competent company worth the government investment.

“Over the years it has been a leading taxpayer in its sector paying on average Shs 15 billion per annum and Shs 1.3 billion in pensions. But it faced severe liquidity challenges that included taking expensive loans, bank guarantees of about Shs 130 billion, plus COVID-19 which affected many other companies,” Kiwanuka said.

He further mentioned that Roko’s projects worth Shs 292 billion had stalled some of which comprised the Inspectorate of Government building, Uganda Cancer institute, the new Parliament Chamber and ministry of Finance offices.

Meanwhile, Kivumbi in his minority report dissented on several issues like lack of due diligence, the case for majority shares and equity, risk of preferential shares, numerous court cases of Roko, unfair selection of Roko, and insensitive timing of the proposal, and others.

“In the recent past due to failure to undertake due diligence, the same Roko Construction Limited together with FINASI entered into an agreement with the government to construct a specialized hospital in Lubowa. To date, no substantial progress has been registered and this prompted the House to reallocate Shs 319 billion that was proposed for promissory notes. This too reaffirms the need to contract a competent firm to undertake due diligence before the House pronounces itself on the proposal,” reads part of the minority report.

Kivumbi, who also doubles as shadow minister for Finance, recommended that approval of the share purchase be stayed until due diligence is undertaken by independent competent professional accounting firms. He says that this will inform the decision-making processes of parliament. The minority report further recommends that government should acquire 51 per cent of the ordinary shares of Roko which would amount to Shs 16 billion instead of the proposed Shs 207.13 billion as a condition for the acquisition of preference shares.

Kivumbi says that there is a risk that if there is no such conditioning, government may prioritize preference shares. He told parliament that majority shareholding will ensure that government has both a stake in ownership and control and that it will also be in line with the presidential directive of acquiring equity in the company.

Kivumbi argues that the government as a preferential shareholder will only attend annual general meetings of the company but cannot vote. He adds that irrespective of being entitled to two seats on the board of directors with veto powers on loan acquisition and annual company budget, it is a hoodwinking proposition.

Kivumbi noted that Roko is facing up to 27 cases in the Commercial court. He said that it was unfortunate that the committee never ascertained the implication of the cases in court on the proposed acquisition of shares.

“The critical question that the committee never enquired was whether it is permissible and advisable to invest such colossal amounts of money into a company which is subject to several court proceedings. On the face of it, the proposal is unjustified in absence of comprehensive due diligence. Therefore, on what basis did the attorney general base on to make clearance of this proposal,” he questioned.

The minority report also noted the unfair selection of Roko for government intervention yet the committee was informed that the government had received several requests from financially distressed construction companies. Kivumbi said that, unlike Roko, the rest were subjected to a comprehensive viability assessment by UDC.

Muwanga further said Roko is regarded as a foreign-owned company with its ordinary shareholders not being citizens of any of the East African states as defined by the Investment Act. He pointed out that the 15,000 ordinary shares are owned by Swiss nationals and that the timing of the proposal was insensitive during the current hard economic times.

He recommended that the ministry of Finance briefs the House on all businesses that have approached the government for financial support and the status of their requests. Also noted by the minority report is that the proposal was presented at a time when citizens are gripped by financial stress, others in Karamoja dying of hunger, fuel shortages, runaway commodity prices, and strikes for salary increments.

Speaker Among earlier said that the processes of securing shares in a company or lending to a company and then recovering requires adequate regulation and clarity of the policies to safeguard the money.

“Issues of due diligence must be done…in case you decide that you are going to buy shares, that firm must be audited first. And this should not only look at Roko as the motion presented, let’s look at other companies. We need to take precaution on all this,” Among noted.

She directed that the minister of Finance presents to the House a list of all local companies that have been bailed out by the government in three months. She also asked for the criteria used for the bailouts.

Among directed that the House gives the minister of Finance time to rectify issues raised by MPs and come back before parliament with a report on actions and measures taken before a vote is taken.