Fred Kerley is the world champion in the 100m, completing an extraordinary journey to the title of world’s fastest man. Kerley, the 27-year-old American who took silver at the Tokyo Olympics, won the crown jewel men’s event of the world track and field championships in Eugene, Oregon, on Saturday night. He prevailed in 9.86 seconds, leading a U.S. medals sweep ahead of Marvin Bracy and Trayvon Bromell, who each ran 9.88.

Kerley overtook Bracy to his left in the final 10 meters.

The same Fred Kerley who has the words “Aunt” and “Meme” tattooed inside his biceps.

“I was two when I first moved in with her, a toddler who didn’t know what was happening around him,” Kerley wrote in 2019. “My Dad ended up in jail, my Mom took wrong turns in life, which meant Aunt Virginia was the only one who could take care of me and my four siblings. Meme – as she is better known – brought up her kids, her brother’s kids and us, with 13 children all living under the same roof. She also brought up the two or three generations after me, and she’s still raising them now – 25 children in total.”

Kerley said that great-aunt Virginia sometimes went without food to make sure he and his siblings ate.

Kerley experienced more setbacks as he transformed into a world-class sprinter. As a South Plains sophomore, he felt leg pain midway through anchoring a relay.

“I carried on before falling over the finish line when I realized I’d tore my quad,” he said, according to World Athletics. “I had a hole in my leg, and I could put my finger in the hole.”

Kerley still made it to Texas A&M as a transfer. He broke through as a senior in 2017, lowering his 400m personal best from 45.10 to 43.70, making the world championships team and finishing the year as the world’s second-fastest man in the event.

“I became elite by working my ass off,” Kerley said, according to Olympics.com. 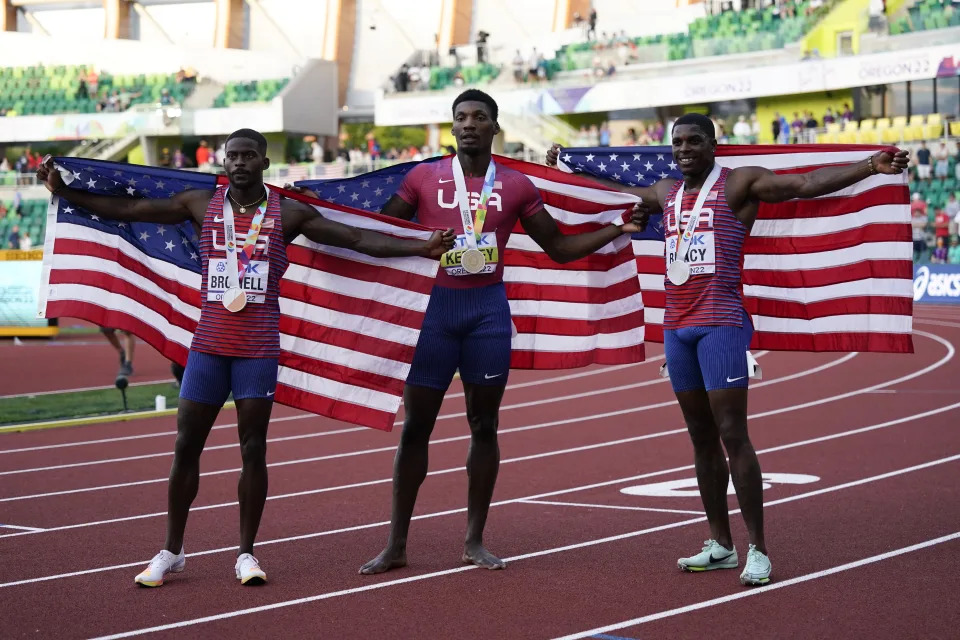 Last year, Kerley raised eyebrows by primarily racing the 100m and 200m. He ultimately chose those two events at Olympic Trials, reportedly dropping the 400m because of an ankle injury.

“My ankle was swollen,” he said, according to Athletics Weekly. “I decided at the last minute to run the 100m and 200m, knowing that I couldn’t go ’round the turns [in the 400m] the way I wanted to.”

It paid off. Kerley took 100m silver at the Olympics in his global championships debut at the distance. He began 2021 with a 100m personal best of 10.49 from his South Plains days. He finished it running 9.84 in the Olympic final.

This year, he ran 9.76 and 9.77 within a two-hour span at the USA Track and Field Outdoor Championships last month. On Friday at worlds, he ran 9.79, the fastest-ever first-round time at a global championship.

Like Kerley, Bracy and Bromell have their own yearslong stories to this moment.

In 2013, Bracy left the Florida State football program after his redshirt freshman season to turn pro in track, one year before the Seminoles won their last national title.

He unexpectedly made the 2016 Olympic team, eliminated in the semifinals in Rio, then gave football one more shot. He worked out for the Indianapolis Colts and Carolina Panthers in 2017 but did not play a regular season game. He was briefly a member of the Seattle Seahawks in 2018 and the Orlando Apollos of the AAF in 2019. He returned to track in 2020, going nearly three years between races. Now, he’s on the podium at a global outdoor championships for the first time at age 28.

Bromell last year ran the world’s fastest 100m times before and after the Olympics, but in Tokyo was eliminated in the semifinals. Had he won any medal in Japan, it would have marked an all-time rebound. Bromell was wheeled out of the Rio Olympics in a chair. He completed three total races in 2017, 2018 and 2019 due to injuries and was considered finished.

Italian Marcell Jacobs, the surprise Olympic gold medalist, withdrew before Saturday’s semifinals due to injuries in both legs. Jacobs has been set back by illness and injuries since winning the world indoor 60m title in March.

Worlds continue Sunday with finals in the women’s 100m and American gold-medal favorites in the men’s 110m hurdles and shot put and women’s pole vault and hammer throw.

Also Saturday, Chase Ealey became the first U.S. woman to win a world title in the shot put. Ealey bounced back from a fifth-place finish at Olympic Trials to notch the second-best throw in American history this season. On Her Turf has more on Ealey here.

Ethiopian Letesenbet Gidey, the world record holder at 5000m, 10,000m and half marathon, earned her first global gold by taking the 10,000m. Gidey, expelled from school as a teen for refusing to run in P.E. class, held off world 5000m champion Hellen Obiri of Kenya in a furious, five-woman fight on the final lap of the 25-lap final.

Ethiopian-born Dutchwoman Sifan Hassan was fourth, a year after taking gold in the 5000m and 10,000m and bronze in the 1500m in an unprecedented Olympic triple and then took an eight-month offseason. On Her Turf has more on the women’s 10,000m here.

“I really needed a break after the Tokyo Olympics,” Hassan said. “I was mentally crashed. I didn’t even care about running.”

Wang Jianan of China won the men’s long jump, overtaking Olympic champion Miltiadis Tentoglou of Greece by four centimeters by leaping from sixth place to first on his sixth and last jump.

All of the favorites advanced into the women’s 100m semifinals, including Jamaica’s two-time Olympic 100m champions Shelly-Ann Fraser-Pryce (10.87) and Elaine Thompson-Herah (11.15).