POLITICS: Shock as NUP Legislator fails to construct a single English statement at the floor of parliament 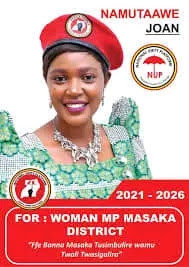 Social media is awash with a video showing the woman MP for Masaka District who belongs to the National Unity Platform, Hon Namutaawe JOAN was climbing mountains and sweating as she struggled to present a matter of national importance during  parliament session.

Hon Joan Namutaawe found  the hardest time of her life as she struggled to find right words  to construct an English sentence in her critical submission.

The sweating Member of Parliament was trying to tell the house how a certain  school  that was constructed  in her area at the cost of 2 billion shillings  by government  was lacking the teaching staff with the school  only having the Headteacher and his Deputy.

As she tried to make her submission, her fellow legislators  were bursting into laughter something  that made her moment so difficult.

“Right Honourable Speaker my players, I request the ministry of education and the public service on recruitment of teacher at school” the MP continued to struggle to speak English.

After this, she failed to construct another sentence in English as the other members sat to listen and let her finish his statement.

However, the Deputy Speaker Hon Tayebwa tried his best to protect  the Masaka legislator ordering the house to stay mute as she made her submission.S