The Guardian: Follow View Profile Australian PM Albanese ‘very confident’ there will be no Chinese bases in Solomon Islands 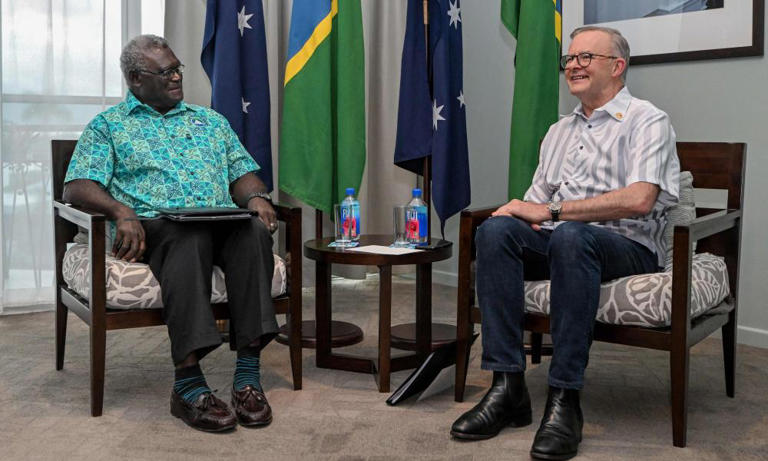 The Australian prime minister, Anthony Albanese, has said he is “very confident” there will not be Chinese bases in Solomon Islands, despite the two countries’ security pact. Albanese made the comments from Fiji, where he is attending the Pacific Islands Forum in a bid to reset relations with Pacific neighbours by outlining higher ambitions on climate change and asking for Australia to remain the region’s security partner of choice, not China.

Solomon Islands’ security pact with China has shocked the Australian government out of complacency towards the Pacific, due to fears it would allow China to build a military base less than 2,000km from Australia’s east coast.

Albanese met Solomon Islands prime minister, Manasseh Sogavare, on Wednesday to discuss regional security and climate change, as well as the leaders of Fiji, the Federated States of Micronesia and Samoa in separate bilateral meetings.

Sogavare greeted Albanese warmly, asking him for a hug, but alluded to tensions between the countries, telling him: “We are family, there are issues [but] that makes family strong.”

On Thursday, Albanese told Channel Nine’s Today program he is “very confident” China will not be allowed to build bases in Solomon Islands.

“I had a very constructive meeting with prime minister Sogavare yesterday. And I sat with him at dinner last night,” Albanese said.

“One of the things we need to do is build personal relations between Australia and our friends in the Pacific. To make sure that our interests, but also their interests, are protected.”

Albanese said climate change was the “number one” issue for Pacific nations, because it is “a threat to their very existence”, and noted his government’s higher emissions reduction ambition had been welcomed by Australia’s neighbours.

Albanese said Solomon Islands is a “sovereign nation” but Australia had made clear what its “interests are”.

On Channel Seven’s Sunrise, Albanese added that he was “very confident” that Australia “can continue to be the security partner of choice” for Pacific countries. He cited initiatives including infrastructure development and protecting fishing stocks as other benefits Australia can provide.

Albanese welcomed the US’s major commitment to the region, including the establishment of new embassies in Kiribati and Tonga.

Albanese said he had watched the State of Origin rugby league match with Pacific leaders “most of whom were supporting Queensland, so they were pretty happy”.

“It was NRL diplomacy happening here from Suva last night.”

Sogavare has ruled out a Chinese base, and accused Australia of hypocrisy for wanting to be consulted about Solomon Islands’ bilateral deal with China when Australia did not consult the Pacific before signing up to the Aukus arrangement.

“When Australia signed up to Aukus, we did not become theatrical or hysterical … about the implications this would have for us. We respected Australia’s decision,” Sogavare said in April.

Pacific leaders will meet on Thursday to discuss a range of issues, with the focus being on the three Cs: climate change, Covid-19 and competition in the region.

Australia is seeking the Pacific Island Forum’s support to host a Conference of the Parties climate summit in Australia in 2024.

Australia has been seen by Pacific leaders as a climate laggard, and the last Pacific Islands Forum leaders’ retreat in 2019 descended into a standoff between Morrison and the rest of the leaders over Australia’s refusal to support strong language in the joint communique about climate change.

Fiji’s prime minister, Frank Bainimarama, and Tuvalu’s former prime minister Enele Sopoaga both said in the aftermath of the 2019 forum that they were shocked and deeply offended by Scott Morrison’s behaviour at the leaders’ meeting.

At the time, Bainimarama told the Guardian that Morrison was “very insulting and condescending” and could drive Pacific leaders closer to China.

Australian PM Albanese ‘very confident’ there will be no Chinese bases in Solomon Islands (msn.com)