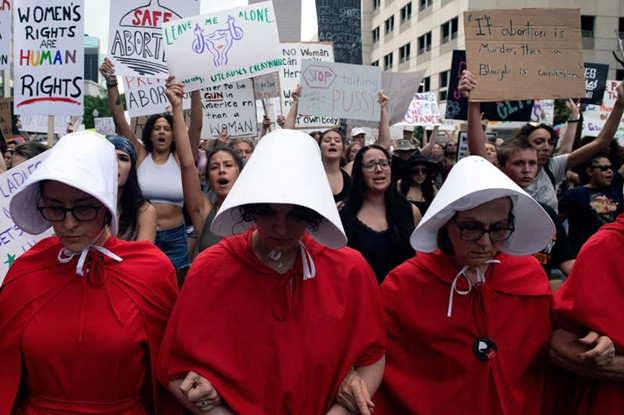 130 Views
She touched on the UK Government’s hostile immigration policies and inertia in tackling the cost-of-living crisis of their own making, as well as the overtly undemocratic actions of a Prime Minister who clearly believes the rules apply to everybody but him. © Abortion rights activists, dressed in an outfits from The Handmaid’s Tale, lead protestors during a …Then, last week, we saw the chilling ruling by the conservative-packed US Supreme Court to overturn the landmark Roe vs Wade case from 1973, which granted women the federal right to an abortion.

With control of abortion now returned to individual states, more than half of them have moved to seriously restrict or outright ban it almost immediately, and this in a country where a sizable majority of people support abortion rights.

I watched in amazement as a group of young women on the news chanted “this is what a pro-life feminist looks like”. I’m sorry to have to tell you, that’s not a thing.

Since when were we expected to accept without thinking, something as reality, just because someone shouted it out loud? Donald Trump definitely didn’t commit treason; it was a wily Westminster fox that broke the Number 10 swing; Boris Johnson knows the exact number of children he’s fathered.

Easily one of my favourite family stories is when my Gran, a minister’s wife, was approached by some women of the congregation to sign a petition against David Steel’s Abortion Bill.

My mum recounts fondly that she refused to sign it, simply on the basis that she was the mother of daughters – an act that I don’t know if I’ll ever truly grasp the enormity of for someone in her position at that time.

The influence of the extremist right on policymaking on both sides of the Atlantic is clearer than ever. This most recent attack on the liberties of half the US population is a visceral reminder that rights are hard won but often much more easily taken away. So, let’s send a clear message back – we’ll be ready to defend the next right you threaten to take away.

Share
Facebook
Twitter
Pinterest
WhatsApp
Telegram
Previous articleSky News:Travis Barker has been rushed to hospital in Los Angeles, according to reports
Next articleThe PDM sensitisation tour in Kampala started on Tuesday at Kampala Central Division,at Kitante Primary School and then to Rubaga Division at Rubaga Division.The Hon Ministers delivered the Parish Development Model message in all the divisions