HomeActivismdw.com:Follow Ukraine: Zelenskyy urges Belarus not to get dragged into war —...
ActivismAfricaConflict 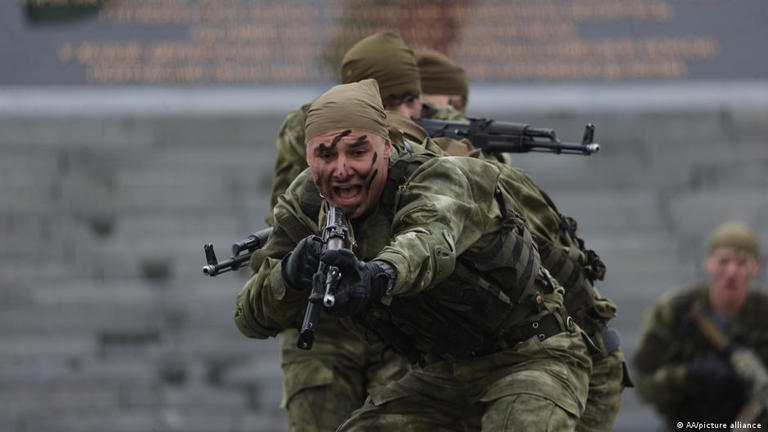 Ukrainian President Volodymyr Zelenskyy says that Russian leadership wants to draw Belarus into the war. He appealed to Belarusians to stay away from the conflict. Follow DW for the latest. © AA/picture allianceThe Belarusian army could be drawn into Russia’s war of aggression in Ukraine, Ukrainian President Volodymyr Zelenskyy has warned

Ahead of addressing the G7 summit via video link, Zelenskyy has urged Belarus not to get dragged into the conflict

This article was last updated at 2320 UTC/GMT

Zelenskyy appeals to Belarus not to get drawn into war

In his nightly video address, Ukrainian President Volodymyr Zelenskyy has called on the people of neighboring Belarus not to be drawn into Russia’s war of aggression in Ukraine.

“The Kremlin has already decided everything for you. But you are not slaves and cannon fodder. You don’t have to die,” he said.

“I know that the people of Belarus support Ukraine, they support us, definitely us, not the war. And that is why the Russian leadership wants to draw you — all Belarusians — into the war, wants to sow hatred between us,” Zelenskyy said.

He called on ordinary Belarusians to refuse to participate in this war. “Your lives belong only to you, not to someone in the Kremlin,” the Ukrainian president added.

“Part of the missiles were shot down. But only part. We need a powerful air defense — modern, fully effective. Which can ensure complete protection against these missiles,” he said.

According to Zelenskyy, the Ukrainian authorities talk about this every day with their partners. However, he warned that delays in arms transfers to Ukraine and any restrictions are actually an invitation for Russia to keep striking.

The war in Ukraine could allow illegal drug production to flourish, the United Nations warned on Monday.

Previous experience from the Middle East and Southeast Asia suggests conflict zones can act as a “magnet” for making synthetic drugs, which can be manufactured anywhere, the United Nations Office on Drugs and Crime (UNODC) said in its annual report.

The UNODC said the number of dismantled amphetamine laboratories in Ukraine rose from 17 in 2019 to 79 in 2020, the highest number of seized laboratories reported in any country in 2020.

Ukraine’s capacity to produce synthetic drugs could grow as the war continues, it added.

“You don’t have police going around and stopping laboratories” in conflict zones, UNODC expert Angela Me said.

What happened in Russia’s war in Ukraine on Sunday

US President Joe Biden told G7 leaders gathered in Germany that the West must remain unified in its response to Russia’s invasion of Ukraine.

Pro-Russian separatists said that around 250 more people were evacuated from the Azot chemical factory in Sieverodonetsk after Ukraine relinquished control of the city.

Britain’s Ministry of Defense said most Ukrainian forces had withdrawn from their remaining defensive positions in the city of Sievierodonetsk.

Click here to catch up with all of Sunday’s major developments regarding the war in Ukraine.

Ukraine: Zelenskyy urges Belarus not to get dragged into war — live updates (msn.com)