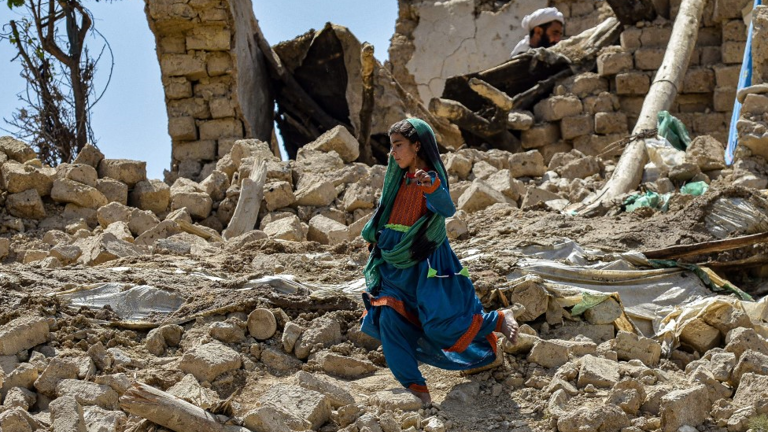 At least 1,000 people have died and another 3,000 have been injured in an earthquake in eastern Afghanistan.

© Getty ImagesWhy do so many earthquakes happen in Afghanistan?

Hundreds of houses were also destroyed in the event, which took place in the mountainous province of Paktika.

It is the deadliest earthquake to have struck Afghanistan in two decades.

Why are there so many earthquakes in Afghanistan?

Earthquakes happen when there is sudden movement along the tectonic plates which make up the Earth’s surface. Fractures called fault lines occur where the plates collide.

Afghanistan is very prone to earthquakes because it is located on top of a number of fault lines where the Indian and Eurasian plates meet.

© BBCWhy do so many earthquakes happen in Afghanistan?

In the past two weeks alone, there have been 10 moderately-sized earthquakes in and around Afghanistan with magnitudes of 4 and over.

There have also been 219 minor earthquakes in the past year with magnitudes of between 1.5 and 4.

Why was the recent earthquake so deadly?

The earthquake was caused by stress built up from the collision of the Indian and Eurasian plates. It measured 5.9 on the Richter scale, according to the US Geological Survey.

This is roughly equivalent to 475,000 tons of TNT, or 37 times the energy released by the atomic bomb dropped on Hiroshima, according to the US Federal Emergency Management Agency.

Tremors were felt as far as 500km away in Pakistan and India.

One of the reasons why it was so destructive is that it happened only 10km (6 miles) underneath the earth’s surface, according to the US Geological Survey’s measurements.

“This part of Afghanistan contains the foothills of the Himalayas,” says Dr Brian Baptie, seismologist with the British Geological Survey.

“Here, the tectonic plates are not colliding directly, but are partly sliding past each other. The result of this is that earthquakes in this region tend to be more shallow, and so the shaking is much closer to the surface.

“This earthquake was only a moderate-sized one but in terms of impact, it was extremely destructive.”

What other earthquakes have hit Afghanistan?

Over the past decade more than 7,000 people have been killed in earthquakes in Afghanistan, the UN’s Office for the Co-ordination of Humanitarian Affairs reports. There are an average of 560 deaths a year from earthquakes.

Most recently, back-to-back earthquakes in the country’s west in January killed more than 20 people and destroyed hundreds of houses.

An earthquake in May 1998, in Takhar and Badakhshan provinces in northern Afghanistan, killed about 4,000 people. Nearly 100 villages and 16,000 houses were destroyed or damaged, and 45,000 people were made homeless.

Why are earthquakes particularly damaging in Afghanistan?

Japan and countries in South America tend to have more earthquakes than Afghanistan, says Dr Baptie.

“However, Afghanistan is particularly vulnerable, because the buildings there are not earthquake-resistant,” he says.

“They tend to be built of timber and adobe – a type of mud brick – or out of weak concrete.”

A lot of damage from earthquakes in Afghanistan’s mountains also comes from the landslides they cause.

These can flatten houses in mountain villages and also block up rivers, causing widespread flooding.

Sometimes, it takes several days for news of an earthquake disaster to reach the authorities.

Landslides can close roads, making it difficult to get rescue workers and equipment to remote mountain locations.

Rescue efforts are then often hampered by hostile weather conditions such as rain or snow, fog, and extreme cold.

“Afghanistan is going through a dire humanitarian crisis with some 3.5 million people displaced inside the country,” it said in a statement.

“Millions of others are struggling to survive amid rising levels of poverty and hunger.”

Why do so many earthquakes happen in Afghanistan? (msn.com)