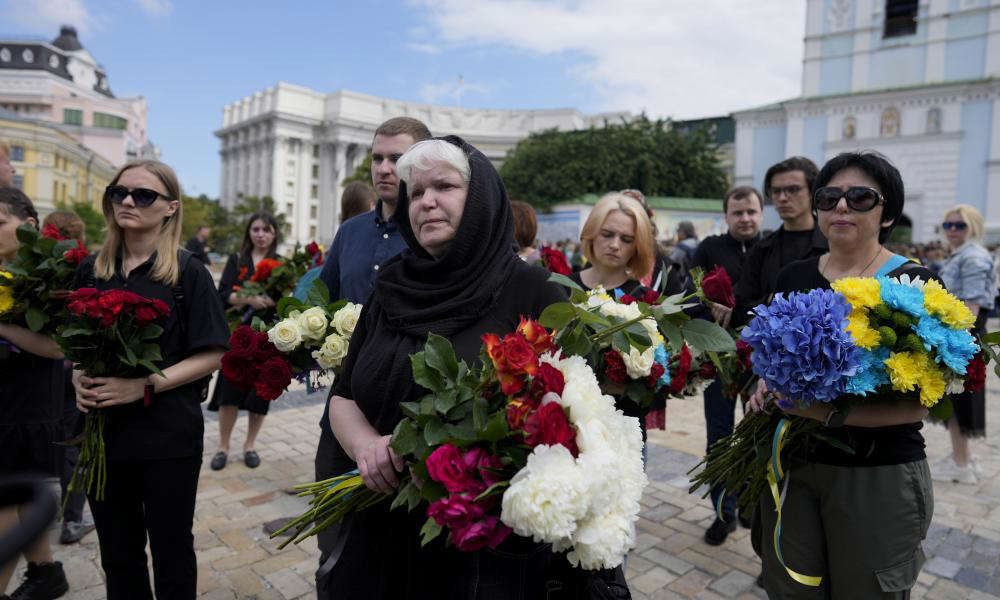 There are funerals every day in Kyiv, but this one felt particularly poignant. Hundreds of friends and fellow activists, clad in Ukrainian flags, gathered on Saturday to pay tribute to Roman Ratushnyi, a prominent political and environmental campaigner who was recently killed fighting near Ukraine’s second-biggest city, Kharkiv.

“All our brightest, bravest guys are dying. The war’s toll on society is immense,” said activist Ivana Sanina, 23, on Thursday during an earlier remembrance ceremony for Ratushnyi.

He was one of the student protesters beaten by the brutal Berkut riot police on the first night of the pro-western Maidan revolution in 2013. The pro-Russian then president Viktor Yanukovych’s decision to crush the student demonstrations soon triggered bigger protests and eventually led to Yanukovych fleeing Kyiv for Moscow.

After Maidan, Ratushnyi worked as an investigative journalist, exposing local corruption. But he is best known in Kyiv for leading a campaign in 2019 to protect Protasiv Yar, a green area in central Kyiv that developers wanted to take over. It was near Protasiv Yar that mourners gathered last week.

His death, a few weeks before his 25th birthday, underlines the massive toll Russia’s invasion is having on Ukraine’s promising new generation.

“He was the voice of the free, independent Ukraine. He had such a big future ahead of him,” Sanina said, adding that none of her friends was surprised when Ratushnyi decided to join the army at the start of the war.

Thousands of young Ukrainians, who have only ever known an independent Ukraine, volunteered to join the army and its territorial defence forces when Russia launched its invasion on 24 February.

And while the country has been successful in repelling Russian forces, it is now suffering some of its heaviest losses since the start of the war as the battle for the east of the country enters its decisive stages. Between 100 and 200 Ukrainians are believed to be dying every day as the fighting turns into a prolonged war of attrition with no end in sight.

Many are fighting with practically no military training against a Russian army that, while stuttering, still outguns its opponent by as many as 10 to one.

In a recent interview with the Economist, Ukraine’s defence minister, Oleksii Reznikov, said that the death of young Ukrainians was an inevitable consequence of Russia’s invasion, blaming Ukraine’s lack of heavy weapons.

“How else can it be? Young guys end up on the frontlines, where no one wants them to be, and they die … the world needs to know about it.”

Valya Polishchuk, a photographer from Kyiv, said that her days now are “filled with going from funeral to funeral”. “I was at the funeral of another friend when I heard about Roman,” she shrugged, before kneeling as the car passed carrying Ratushnyi’s body.

The contrast is a big one, his friends say, between the deaths of Ukrainian activists-turned-soldiers such as Ratushnyi and those of Russian contract soldiers.

Russia last announced its official death toll in late March, but independent Russian media have been keeping their own tally of Russian casualties, illustrating the fact that poorer, more remote regions have been disproportionately affected by the war. According to the independent Russian website Mediazona, only eight soldiers from Moscow have died so far in Ukraine and 26 from the second-largest city, St Petersburg.

The largest numbers of confirmed deaths – 207 – were of soldiers from the Muslim North Caucasus region of Dagestan, followed by Buryatia in Siberia (164), two regions where a career in the armed forces is seen as being one of the only ways out of poverty. Some analysts have also linked this discrepancy with Russia’s desire to keep the grim realities of the war away from the largely well-to-do urban areas.

It is just not Roman who died, but also part of Ukraine’s future. This will leave a footprint on his friends

In an attempt to point out the perceived hypocrisy of Russian elites in Moscow, anti-war activists have started an online campaign, addressing senior politicians on Twitter with questions about why they are not sending their children to fight.

Masi Nayyem, 37, a prominent Ukrainian lawyer-turned-soldier, said the war will harden Ukraine’s new generation for many decades to come. “It is just not Roman who has died, but also part of Ukraine’s future. This will leave a footprint on his friends.”

Nayyem was speaking to the Observer from a hospital in Dnipro, where he was recovering from serious head injuries inflicted while fighting earlier this month, blinding him in one eye.

“Ukraine’s new generation will be different – they will remember this war for the rest of their life. There will be no reconciliation with Russia for decades to come.”

The war had certainly hardened Ratushnyi, who wrote on Twitter a month before his death: “The more Russians we kill now, the fewer Russians our children will have to kill.”

In Kyiv, where anti-war and anti-Putin art can be seen on virtually every corner of the city, young people who are not volunteering at the front have found other ways to aid the army. When the war broke out, dozens of restaurants run by young people in Kyiv switched their focus to cooking for the army, and local hospitals and popular young designers quickly pivoted from high fashion to making Ukrainian military uniforms.

“The war has created a new sense of unity and awareness,” said Kyiv-based designer Anton Belinskiy, one of the leading faces of Ukraine’s new fashion movement.

Still, they are fears that the war will lead to a demographic catastrophe in the country, with millions having fled Ukraine since the invasion began, while thousands of men are dying on the battlefield.

Perhaps sensing the urgency, Ukraine’s leader, Volodymyr Zelenskiy, recently addressed Ukrainian students across the UK, calling on them to come back and rebuild the country.

“I can build a state for all of us, for our generation and for elderly people. We can try many things,” Zelenskiy said. “But building a future without a young generation is something that is impossible to make.”