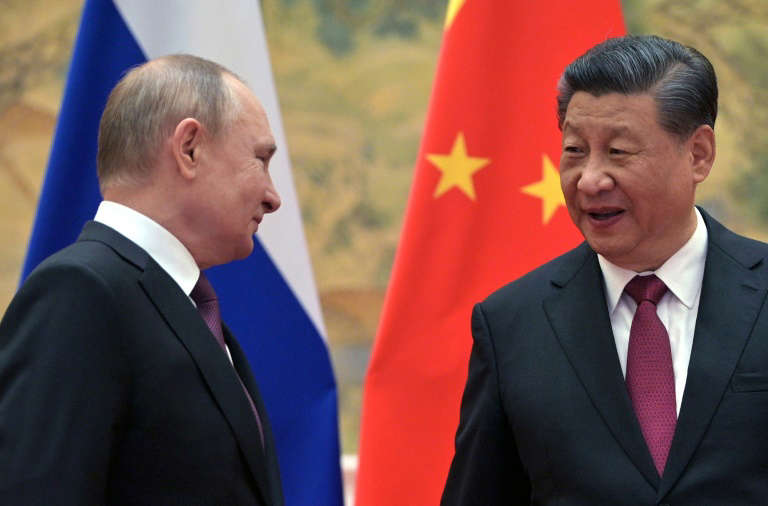 China is “willing to continue to offer mutual support (to Russia) on issues concerning core interests and major concerns such as sovereignty and security,” Chinese state broadcaster CCTV reported Xi as saying.

It was the second reported call between the two leaders since Putin launched his invasion of Ukraine on February 24.

China has refused to condemn Moscow’s invasion of Ukraine and has been accused of providing diplomatic cover for Russia by blasting Western sanctions and arms sales to Kyiv.

According to CCTV, Xi praised the “good momentum of development” in bilateral relations since the start of the year “in the face of global turmoil and changes”.

China was ready to “strengthen communication and coordination” with Russia in international organisations and “push the international order and global governance towards more just and reasonable development,” he added.

The European Union and the United States have warned that any backing from Beijing for Russia’s war in Ukraine, or help for Moscow to dodge Western sanctions, would damage ties with China.

China as well as India are two major economies that have not taken part in retaliatory measures against Moscow over its invasion.

In the eyes of Chinese officials, the Europeans have allowed themselves to be sucked into backing Ukraine, at Washington’s initiative, in a move contrary to their interests as Russian gas consumers.

Once bitter Cold War enemies, Beijing and Moscow have stepped up cooperation in recent years as a counterbalance to what they see as US global dominance.

The two countries have drawn closer in the political, trade and military spheres as part of what they call a “no limits” relationship.

Wednesday’s call between the two leaders fell on Xi’s 69th birthday and was their first reported communication since the day after Russia launched its invasion of its European neighbour.

Xi, who has described Putin as an “old friend”, also invited his Russian counterpart to the opening ceremony of the Beijing Winter Olympics in early February.

Beijing is Moscow’s largest trading partner, with trade volumes last year hitting $147 billion, according to Chinese customs data, up more than 30 percent on 2019.