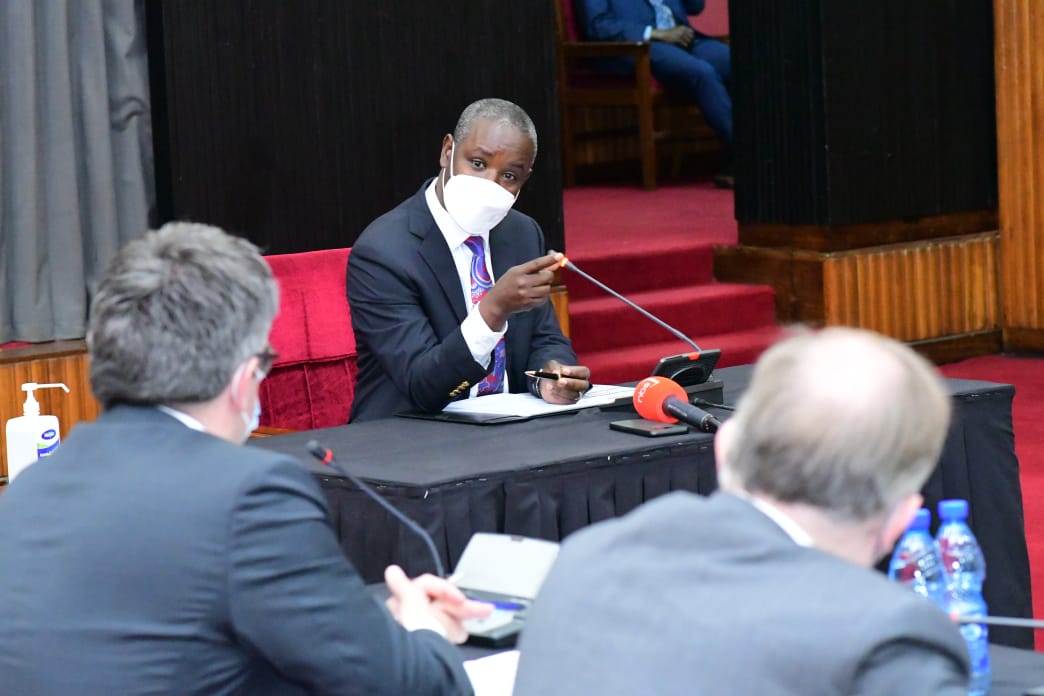 Deputy Speaker of Parliament Thomas Tayebwa addresses European and American investors yesterday. Photo by Alex Esagala.
Tayebwa was addressing a delegation from the Bundestag (the parliament of Germany) that called on him at Parliament on Tuesday.
The German delegation was led by Stefan Rouenhoff, the representative of the State of North Rhine-Westphalia in the Bundestag.
The Deputy Speaker told the German legislators whom he led on a guided tour of the Parliament building, that there is still a lot of investment potential in Irrigation, Agro-processing, Value addition to minerals, Oil and Gas, and Infrastructure like Railway construction among others. He said that much as Uganda is a landlocked country, it has a ready market for finished products within the East African region and across the African Continent.
“We do need to see more, especially in the plan to build more industrial parks. Uganda supplies DRC, South Sudan, and Rwanda. We are land locked as we used to study in Geography but now we changed from being landlocked to being a ‘land linked’ country” Tayebwa said. 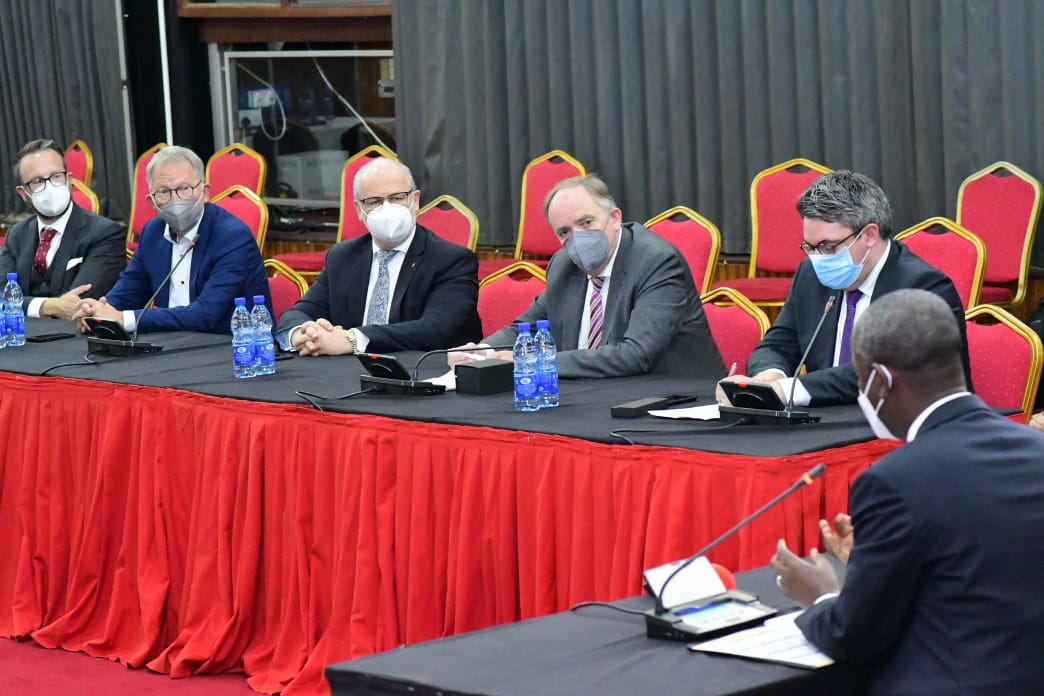 Deputy Speaker of Parliament Thomas Tayebwa discusses with European and American investors yesterday. Photo by Alex Esagala.
Tayebwa also added that since 1986 when the National Resistance Movement (NRM) government came into power, their focus has been on building an investment-friendly environment through ensuring peace and security, stabilizing the Uganda shilling and offering attractive incentives for investors.
He argued that western countries should however, revisit the conditions of the concessional loans they offer to the African countries including Uganda adding that,the Chinese have become a better option especially in infrastructure development because their terms are more flexible.
“The Chinese investments are doing extremely well not only in Uganda but across Africa. It is a situation we had to face and make choices because of the condition of the loans that were coming from the western world. The western world wasn’t ready to venture into investing in the projects.” He emphasized.
Adding that; “We do believe that if you are giving me money, I am going to pay back, so why tag in so much that is not going to contribute to the pay back of this money? As Africa, we have to be very conscious so that we don’t go into a debt trap as much as we want to transform our economy.”
However, Tayebwa commended the German government for the good bilateral relations and support they have offered to the government and the people of Uganda through their investment, especially in the energy and Agricultural sectors,but also urged them to widen their scope because Uganda has a wide range of sectors where foreign direct investments can thrive. 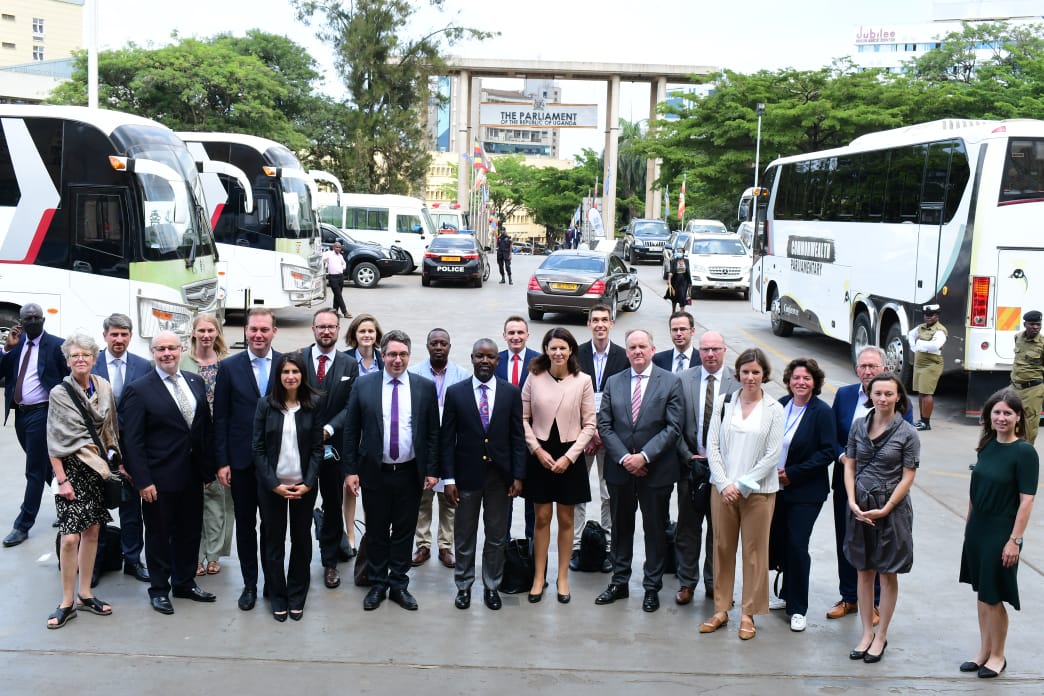 Deputy Speaker of Parliament Thomas Tayebwa (C) poses for a group photo with European and American investors yesterday. Photo by Alex Esagala.
He commended the European Union for the funding availed to Uganda after supporting the recently concluded Kampala Northern Bypass that was worked on by a Portuguese firm, Mota Engil, and, the 400m Euros it is injecting in the Kampala-Jinja Expressway that is under procurement.
The Deputy Speaker praised the Ugandan education development programmes and policies that have helped the country to rank high in the women emancipation whereby at least 40% of the positions in the current government are occupied by women.
He said that Ugandans take pride in these policies which have seen women being entrusted with high positions of leadership. He mentioned among the women holding top positions of leadership, the Vice President Jessica Alupo, Speaker of Parliament Anita Annet Among, Prime Minister Robinah Nabbanja , First Deputy Prime Minister Rebecca Kadaga (who is also a former Speaker of Parliament) and Third Deputy Prime Minister Rukia Nakadama.