The tournament is a pathway to the 2023 ICC Cricket World Cup in India but most importantly a voyage that could end with Uganda securing the much-vaunted One-Day International (ODI) status. 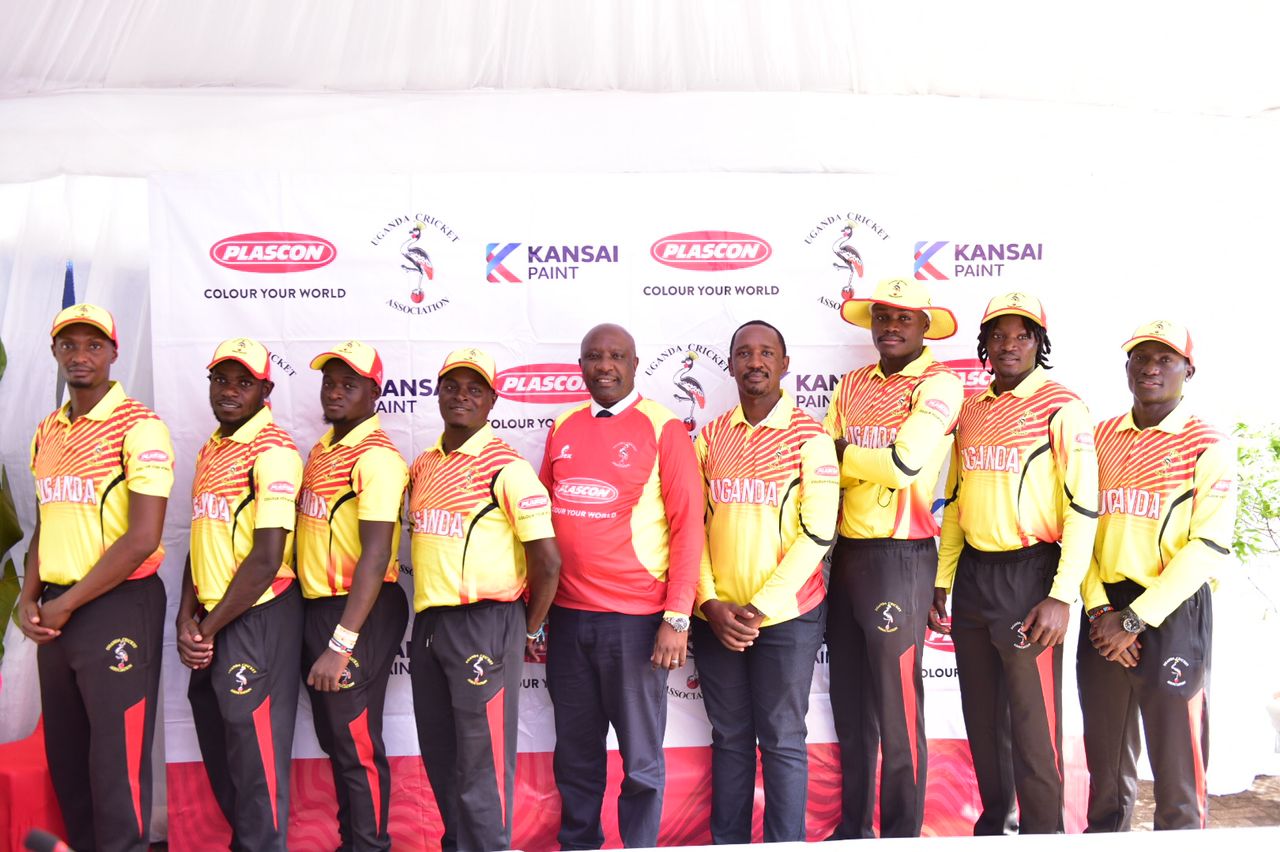 The Cricket Cranes – Uganda men’s national cricket team officials are seen at the launch of a new jersey/Courtesy Photo.

All Uganda has to do is stay at the helm of the standings at the end of this second leg in Kampala and third leg scheduled for Jersey in September.

And so far, so good as Team Uganda, who boast of a new sponsor in Kansai Plascon, is seated atop the log with 10 points – three more than second-placed Hong Kong – from the first leg held in Oman 2019.

Playing at home comes with pressure but coach Laurence Mahatlane has welcomed it and hopes the Cricket Cranes can turn Lugogo and the University Oval in Kyambogo into fortresses as he feels the team has left no stone unturned in preparations.

“We have played nearly 120 games at home since my arrival and I believe we now have a grip of how our home conditions behave,” said the South African tactician who took over the reins in November 2020 – replacing Kenyan legend Steve Tikolo. 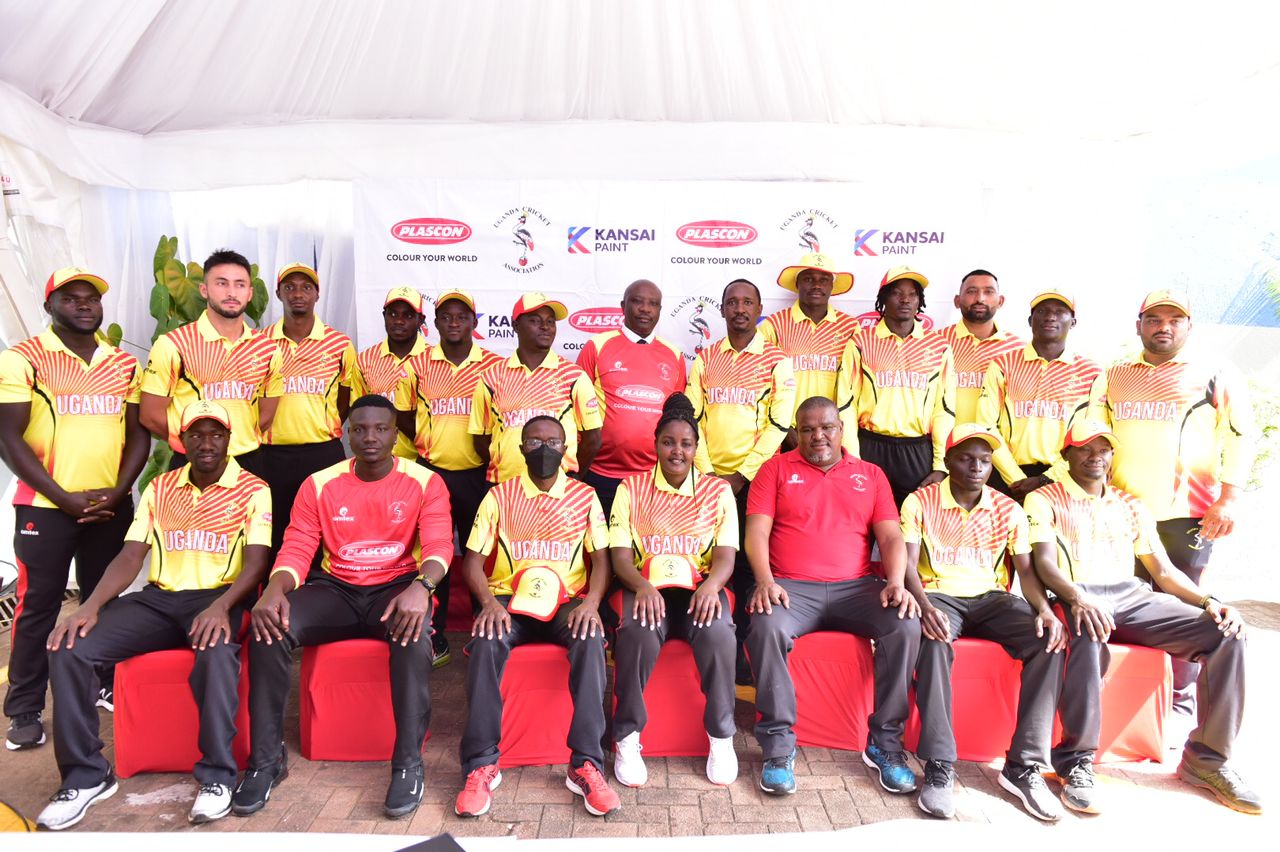 “We are excited to be playing at home after nine months and are looking forward to the home crowd being our 12th man on the field. It is always a privilege to represent more than 40 million people.”

When Uganda hosted a similar tournament – the ICC World Challenge League – Division III in 2017, the Cricket Cranes punched below their weight enroute to relegation to Division IV. In 2019, during the Africa Twnety20 Cup Finals, the rain played spoilsport as Uganda finished fourth behind Nambia, Kenya and Nigeria before its own home fans.

But with familiar challenges in early birds Bermuda and Jersey, who arrived over the weekend, plus Kenya, Hong Kong and Italy, who are scheduled to set foot into the Pearl of Africa today, Uganda knows what to expect.

“We have prepared well and we will be looking to ensure we execute our game plans one ball at a time. We have in-depth analysis and know what every team will be bringing to the table. The key for us is to ensure we execute our processes. We as a team are going to look at delivering some good cricket,” the 45-year-old gaffer without giving away too much on the team tactics.

Like some of its rivals, Uganda travelled to southern African and had a satisfying series against the elite Namibians, who are globally ranked 16th in T20 Internationals and 17th as an One Day International (ODI) nation.

Uganda stunned Namibia by 3 wickets with three balls remaining to level the two-match Castle Lite 50-over Series 1-1 on April 13 after narrowly going down 2-1 in the T20 series and Mahatlane avoided the temptation of tinkering too much with the squad by rewarding the men that did the job in Windhoek with slots on the final 14-man team that must do the job over the next fortnight.

“Our focus is on one game at a time and on our processes. Last year we had equalled the World Record on number of T20I wins and lost our 12th game by one run to Kenya before we picked it up for another five wins in a row. So, I believe we understand tournament cricket,” coach Mahatlane opines.

As the boys check into their residence for the next fortnight – The Munyonyo Commonwealth Resort, the team’s official paint partner Kansai Plascon has ensured the team is fully coloured with new attire before they engage in battles of supremacy.

The tournament is set to have a lot of fanfare with lots of gifts to win for the fans and players thanks to all the other partners including BATBALL, Guvnor, Roke Telkcom, Nile Special, Coca-Cola, Uganda Airlines, Rose Foam, Century CineMax and Radio City.

Uganda’s start its campaign against Jersey on Friday and wraps it up against Kenya on June 26.

TABLE STANDINGS – AFTER ROUND ONE