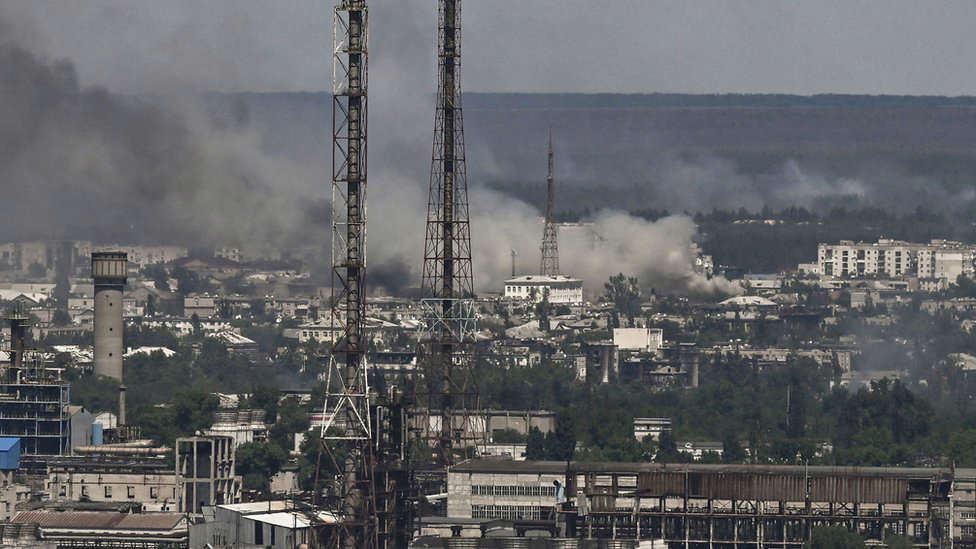 Russian shelling has caused a huge fire at a chemical plant in Ukraine’s Severodonetsk city where “non-stop” fighting rages, the regional head says.

Serhiy Haidai told Ukrainian TV that Saturday’s blaze started after a leak of tens of tonnes of oil from damaged radiators at the Azot plant.

Hundreds of civilians are reportedly sheltering at the plant.

Severodonetsk has become the focal point of Russia’s efforts to advance in eastern Ukraine.

Fighting has lasted more than three months. Russia’s early attempt to capture major cities including the capital Kyiv faltered and is now instead trying to capture the Luhansk and the Donetsk regions – a vast mostly industrial area collectively known as Donbas.

Seizing Severodonetsk and its twin city of Lysychansk would move Russia closer to its goal as it would give them control over Luhansk.

In his statement, Mr Haidai admitted most of Severodonetsk was now in Russian hands. The Russian military says that all of Severodonetsk’s residential areas are now under its control.

“The Azot chemical plant has been under heavy shelling for hours,” Mr Haidai said on Saturday.

He did not say whether there were any casualties and whether the blaze was later extinguished.

Ukrainian officials estimate that as many as 800 civilians are hiding in underground bomb shelters at the Azot plant.

Describing the current situation in Severodonetsk, Mr Haidai said it was “difficult, but under control”.

“Our soldiers are winning in street fights, but, unfortunately, the enemy’s artillery is simply dismantling – floor-by-floor – the houses used by our troops as shelters.

“So, when we push the enemy out of one street, they start using their tanks and artillery to destroy the area house-by-house,” the Luhansk regional head said.

He also said Ukrainian forces had recaptured villages and towns in the south-eastern regions of Kherson and Zaporizhzhia.

Ukraine has been pleading for more weapons from its allies, warning that Russia has at least 10 times more artillery pieces.