The Guardian The Guardian We’re almost out of ammunition and relying on western arms, says Ukraine 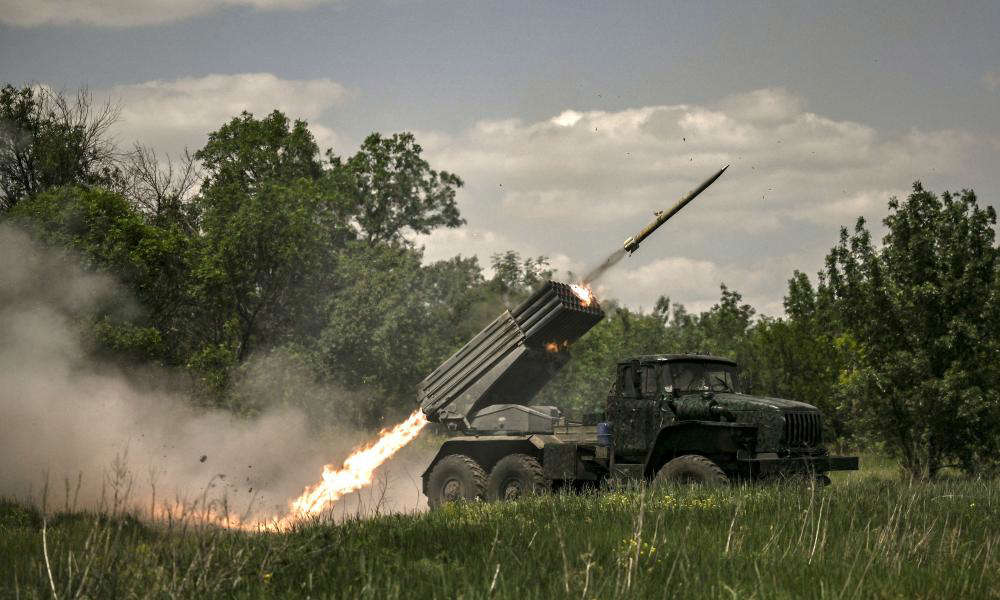 Ukraine’s deputy head of military intelligence has said Ukraine is losing against Russia on the frontlines and is now almost solely reliant on weapons from the west to keep Russia at bay.

“This is an artillery war now,” said Vadym Skibitsky, deputy head of Ukraine’s military intelligence. The frontlines were now where the future would be decided, he told the Guardian, “and we are losing in terms of artillery”.

“Everything now depends on what [the west] gives us,” said Skibitsky. “Ukraine has one artillery piece to 10 to 15 Russian artillery pieces. Our western partners have given us about 10% of what they have.”

Ukraine is using 5,000 to 6,000 artillery rounds a day, according to Skibitsky. “We have almost used up all of our [artillery] ammunition and are now using 155-calibre Nato standard shells,” he said of the ammunition that is fired from artillery pieces.

“Europe is also delivering lower-calibre shells but as Europe runs out, the amount is getting smaller.”

The Ukrainian president, Volodymyr Zelenskiy, said last week that between 60 and 100 Ukrainian soldiers were dying each day and a further 500 were being injured. Ukraine has kept the total number of its military losses secret.

Soldiers speaking to the Guardian from Ukraine’s frontlines this week painted a similar picture.

Skibitsky emphasised the need for the west to supply Ukraine with long-range rocket systems to destroy the Russian artillery pieces from afar. This week the Ukrainian presidential adviser Oleksiy Arestovych told the Guardian that Ukraine needed 60 multiple-rocket launchers – many more than the handful promised so far by the UK and US – to have a chance of defeating Russia.

Ukraine is set to ask the west for a list of weapons and defensive equipment at the contact group meeting with Nato in Brussels on 15 June.

Skibitsky thinks the conflict will remain predominantly an artillery war in the near future and the number of rocket attacks – which can be launched from Russia and have hit civilians – will remain at their current rate.

In the first month, Russia was constantly striking Ukraine with rockets but in the last two months it has slowed. Recent figures published by the head of Ukraine’s armed forces assert that Russia launches between 10 and 14 a day.

Rockets are expensive to manufacture. Each rocket can cost anywhere between a few hundred thousand dollars to several million.

“We have noticed that Russia is carrying out far fewer rocket attacks and it has used H-22 rockets; they are old 1970s Soviet rockets,” said Skibitsky. “This shows that Russia is running low on rockets.”

Skibitsky said Russia was unable to produce rockets quickly because of the sanctions and that it had used around 60% of its supplies.

The sound of sirens has become a daily feature for Ukrainians. Sirens regularly sound in multiple regions simultaneously but most of the time, for people on the ground, it passes without a bang. According to Skibitsky, each siren signals a rocket has entered Ukrainian airspace but its impact is not always reported for security reasons.

“The rockets take anywhere from 40 to 90 minutes to impact, depending on where they are launched from … We don’t know where they are going to land,” said Skibitsky. He noted that Russia was currently using long-range bombers which can reach anywhere in Ukraine without leaving Russian airspace.

In terms of the three frontlines, Skibitsky said most of Russia’s forces were now concentrated in the Donbas region and seeking to occupy the administrative borders of both the Donetsk and Luhansk republics. This was the area, he said, where the artillery battles were the heaviest.

In north-east Ukraine, around Kharkiv, he said Russian forces were focusing on defence after Ukraine’s counteroffensive pushed them out of several towns and villages in the region in May.

“The threat to Kharkiv has lessened,” said Skibitsky, of Ukraine’s second-biggest city, which has been shelled regularly since the beginning of the war.

Lastly, in Zaporizhzhia and Kherson, two southern Ukrainian regions that Russia almost completely occupies, Russian forces were digging in for the long haul, said Skibitsky. According to him, they are building double, sometimes triple, lines of defence.

“It will now be harder to get that territory back,” said Skibitsky. “And that’s why we need to weapons.”

“If they succeed in the Donbas, they could use these territories to launch another attack on Odesa, [the city of] Zaporizhzhia [and] Dnipro,” said Skibitsky of major cities under Ukrainian control which are in close proximity to the southern Russian-occupied areas. “Their aim is the whole of Ukraine and more.”

Ukraine’s military intelligence believes that Russia can continue at its current rate without manufacturing more weapons or mobilising the population for another year.

Skibitsky does not exclude the possibility that Russia will freeze the war for a period of time in order to convince the west to lift sanctions. “But then they will start it again – look at the last eight years,” he added.

We’re almost out of ammunition and relying on western arms, says Ukraine (msn.com)