Residents of Kabutsye village in Masheruka Town Council, Sheema District are in shock after one of their own, Mr Sabiiti Emmanuel Ndyanabo 70, a former lecturer of languages at Makerere University allegedly hacked his two children to death. 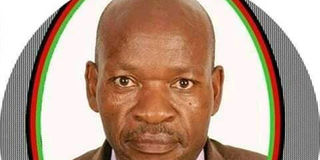 “We are now hunting for Ndyanabo for killing his two children and injuring another. The deceased are Kendo Kukunda, 6, and Lillian Ainembabzi, 16, and the injured is Karisa Sabiiti. The suspect attacked the children while they were sleeping and cut them with a panga,” he said.

Mr Tumusiime said the suspect had wanted to carry out a DNA test to find out whether the children belonged to him or not but later changed his mind.

Ms Lydia Bagonza, the wife of the suspect, accused her husband of being a serial killer who loves shading blood and that he has been threatening to kill her.

“He has killed some children before and now has also killed my children again,” she said.

“These people have been in and out of our office but did not agree with the outcomes and went ahead to go to the police in Kabwohe which resolved  that they should live separate lives and it seemed to work out until now. It is unfortunate that we have lost lives,” he said.

Ms Catherine Kyabarunga, a sister to the suspect, said her brother has always accused his wife of sleeping around with other men.

“When the wife was pregnant, our brother told us that the pregnancy not his so she should look for where to produce the child from. When we asked her, she told us she produced the child and put her under some other person’s care so that she can look for money to look after her,” she said.