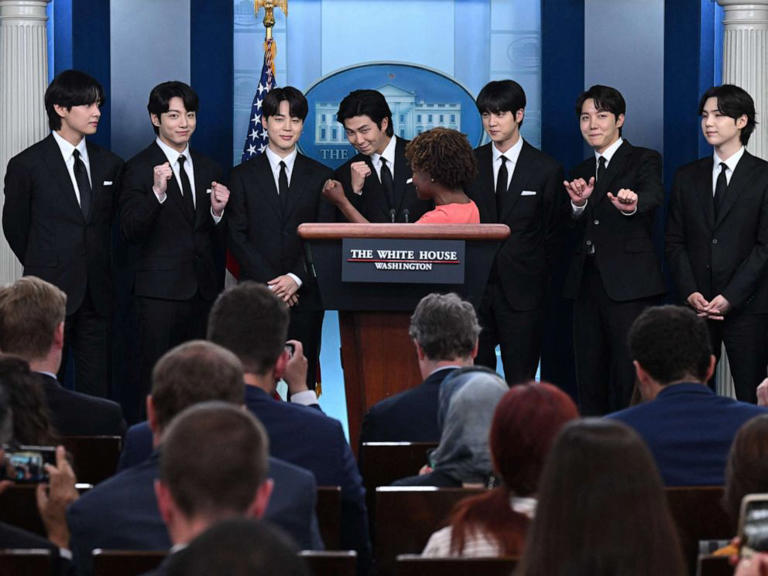 Group member Jin said the group “stands with the AANHPI community,” according to a translator at the briefing.

Ji-min said the group was “devastated by the recent surge of hate crimes, including Asian American hate crimes,” and was at the White House to help “put a stop to this and support the cause.”

The group celebrated the diversity that can be seen within their fanbase, which has transcended continents, languages and cultures. BTS has amassed an international fanbase, selling out stadiums worldwide and winning awards from the MTV Video Music Awards, American Music Awards and more.

“We still feel surprised that music created by South Korean artists reaches so many people around the world, transcending languages and cultural barriers,” said Jungkook, according to a translator. “We believe music is always an amazing and wonderful unifier of all things.” © Saul Loeb/AFP via Getty ImagesKorean band BTS appears at the daily press briefing with Press Secretary Karine Jean-Pierre, in the Brady Press Briefing of the White House in Washington, DC, May 31, 2022.

In a closed meeting in the Oval Office, President Joe Biden and the music group plan to discuss Asian representation, inclusion and anti-Asian discrimination in the U.S.

Between March 2020 and Dec. 31, 2021, the Asian advocacy organization Stop AAPI Hate recorded more than 10,000 reports of hate incidents against Asian American and Pacific Islander persons across the U.S.

MORE: AANHPI Heritage Month: Big things you may have missed while studying US history

“It’s not wrong to be different,” said group member Suga. “Equality begins when we open up and embrace all of our differences.”

V added, “We hope today is one step forward to respecting and understanding each and every one as a valuable person.”

This isn’t the first time BTS has entered the political arena. The members of BTS were given the titles of special presidential envoys for future generations and culture by the United Nations to promote global diplomacy.