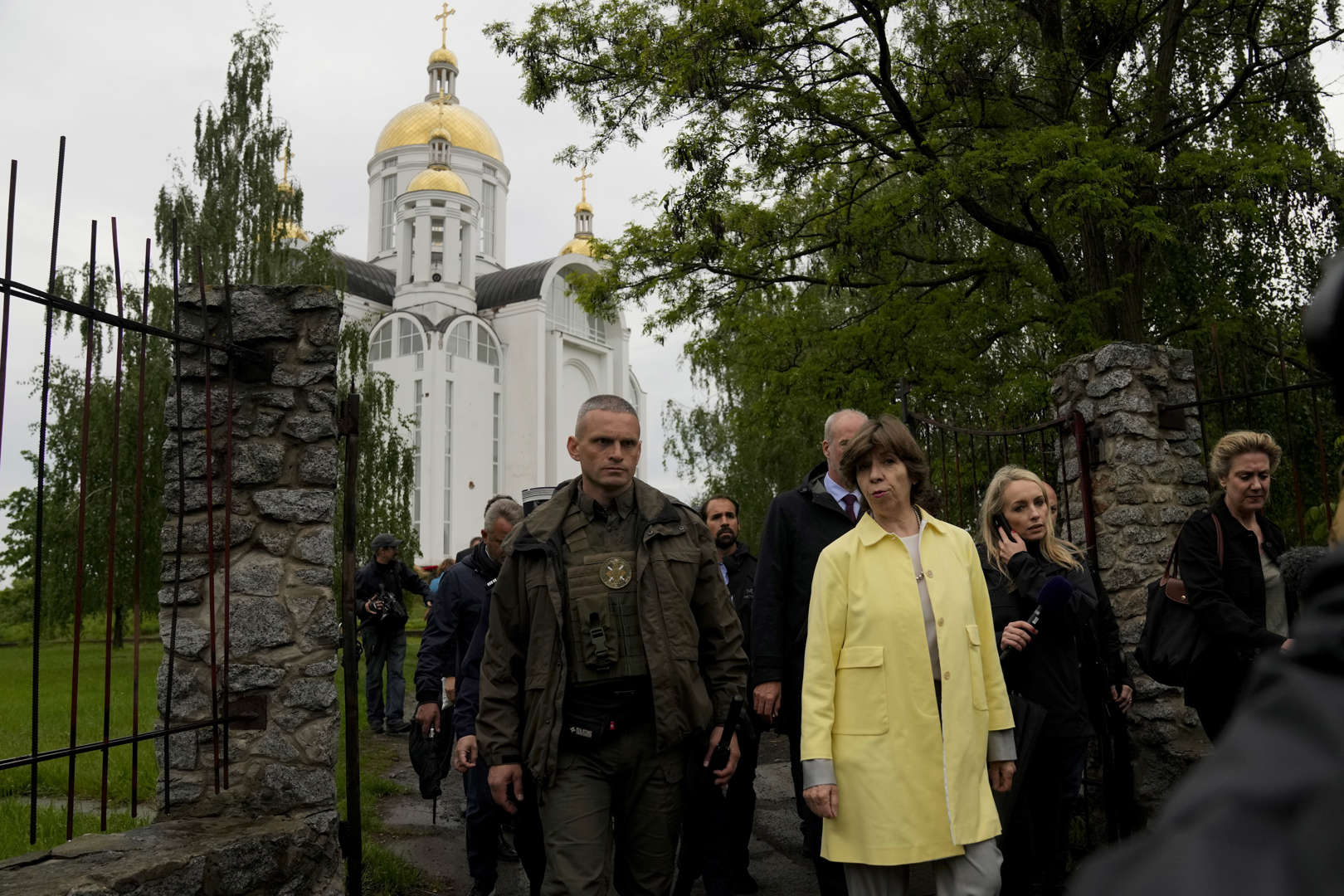 KRAMATORSK, Ukraine (AP) — Russian troops pushed farther into a key eastern Ukrainian city and fought street by street with Kyiv’s forces Monday in a battle the mayor said has left the city “completely ruined” and driven tends of thousands from their homes.

Military analysts painted the battle as part of a race against time for the Kremlin, which they said wants to complete its capture of the industrial Donbas region before more Western arms arrive to bolster Ukraine’s defenses. Weapons from the West have already helped Kyiv’s forces thwart a Russian advance on the capital in the early weeks of the war.

That failure forced Moscow to withdraw, regroup, and pursue a more limited objective of seizing the Donbas, where Moscow-backed separatists already held swaths of territory and have been fighting Ukrainian troops for eight years.

© Provided by Associated PressUkrainian demonstrators demand an embargo on Russian oil during a protest in front of EU institutions prior to an extraordinary meeting of EU leaders to discuss Ukraine, energy and food security at the Europa building in Brussels, Monday, May 30, 2022. (AP Photo/Olivier Matthys)

In recent days, the fighting has focused on Sievierodonetsk in a battle Ukrainian President Volodymyr Zelenskyy has called “indescribably difficult.” Relentless Russian artillery barrages have destroyed critical infrastructure and damaged 90% of the buildings, and power and communications have been largely cut to a city that was once home to 100,000 people.

“The number of victims is rising every hour, but we are unable to count the dead and the wounded amid the street fighting,” Mayor Oleksandr Striuk told The Associated Press in a phone interview, adding that Moscow’s troops advanced a few more blocks toward the city center.

“The city has been completely ruined,” he added, and only about 12,000 to 13,000 residents remain, sheltering in basements and bunkers to escape the Russian bombardment — a situation that recalls the siege of Mariupol that trapped residents and led to some of the worst suffering of the war.

© Provided by Associated PressUrsula von der Leyen, President of the European Commission, speaks to media prior the extraordinary meeting of EU leaders to discuss Ukraine, energy and food security at the Europa building in Brussels, Monday, May 30, 2022. European Union leaders will gather Monday in a fresh show of solidarity with Ukraine but divisions over whether to target Russian oil in a new series of sanctions are exposing the limits of how far the bloc can go to help the war-torn country. (AP Photo/Geert Vanden Wijngaert)

While tens of thousands are believed to have died in Mariupol, Striuk estimated that 1,500 civilians have died in his city since the war began, from Russian attacks as well as from the dire conditions, including a lack of medicine or medical treatment.

The Ukrainian military said Russian forces reinforced their positions on the northeastern and southeastern outskirts of Sievierodonetsk, 145 kilometers (90 miles) south of the Russian border in an area that is the last pocket of Ukrainian government control in Luhansk province.

Luhansk Gov. Serhiy Haidai said the Russians were also pushing toward nearby Lysychansk. He said two civilians were killed and another five were wounded in the latest Russian shelling. Sievierodonetsk and Lysychansk sit on either side of the strategically important Siverskiy Donetsk River.

The Russian advance in Sievierodonetsk and Lysychansk is part of an all-out push — executed without regard for personnel and equipment losses, said Ukrainian military analyst Oleh Zhdanov.

“There is an impression that Russia has set the goal to seize Donbas at any cost,” said Zhdanov. “The Kremlin has reckoned that it can’t afford to waste time and should use the last chance to extend the separatist-controlled territory because the arrival of Western weapons in Ukraine could make it impossible.”

© Provided by Associated PressUkrainian servicemen park a Russian BMP-2, an infantry combat vehicle, in the Kharkiv area, eastern Ukraine, Sunday, May 29, 2022. The Ukrainian military has been recovering abandoned Russian combat vehicles on the frontline to repair them and use them to their advantage. (AP Photo/Bernat Armangue)

The Ukrainians hope they can hold the Russians off long enough for them to run out of steam — or for more Western weapons to arrive. But Mykola Sunhurovskyi, a military expert at the Kyiv-based Razumkov Center think tank, said those are taking a long time to arrive — given the Russians an opening.

© Provided by Associated PressA boy holds a Ukrainian flag on a destroyed Russian tank placed as a symbol of war during Kyiv Day celebrations in downtown Kyiv, Ukraine, Sunday, May 29, 2022. Ukraine’s capital celebrates the anniversary of its foundation every last Sunday of May. (AP Photo/Natacha Pisarenko)

In the Kherson region, the Russia-installed deputy head of the regional administration, Kirill Stremousov, told Russia’s Tass state news agency that grain from last year’s harvest is being delivered to Russian buyers, adding that “obviously there is a lot of grain here.” Ukraine has accused Russia of looting grain from territories its forces hold, and the U.S. has alleged Moscow is jeopardizing global food supplies by preventing Ukraine from exporting its harvest.

Zelenskyy was set to address a gathering of European Union leaders later Monday, as they sought to show their solidarity with Ukraine despite divisions over whether to target Russian oil in a new series of sanctions. The Ukrainian leader has repeatedly demanded that the EU target Russia’s lucrative energy sector and deprive Moscow of billions of dollars each day in supply payments.

© Provided by Associated PressA man carries a sack of wheat flour imported from Turkey in the Hamar-Weyne market in the capital Mogadishu, Somalia Thursday, May 26, 2022. Families across Africa are paying about 45% more for wheat flour as Russia’s war in Ukraine blocks exports from the Black Sea. Some countries like Somalia get more than 90% of their wheat from Russia and Ukraine. That’s forcing many people to substitute wheat for other grains. But the United Nations is warning that the price hikes are coming as many parts of Africa are facing drought and hunger. (AP Photo/Farah Abdi Warsameh)
Russian, Ukrainian troops fight block by block in key city (msn.com)