The most chaotic and unpredictable of runs ends the only way it could – with the team that almost always wins the European Cup, winning with total certainty. There was always a sense Real Madrid’s name was on the trophy, and it is now for a record-extending fourteenth time. Liverpool’s players could not fight fate, although they barely put up a struggle after the opening spell of this underwhelming 1-0 defeat. It was after that, and largely because of that, there only really felt one winner in Paris, too.

Current Time 0:14
/
Duration 0:20
Moment Real Madrid wins Champions League title for the 14th time
0
Jurgen Klopp’s side gave one of their least inspiring performances of the season on the biggest night of the season, even if so much of this occasion failed to live up to its prestige. Most of all, there was the awful organisation of it. The scenes on the pitch were much less important than the dreadful circumstances outside, which saw the game delayed by 36 minutes and fans who had tickets pepper-sprayed. That this happens in 2022 is ludicrous. The failure of the authorities here will now dominate the headlines, but it is Madrid and Carlo Ancelotti who will dominate the records.

The fourteenth Champions League for the club was also the fourth for Carlo Ancelotti as a manager, seeing the Italian surpass Bob Paisley and Zinedine Zidane as the most successful in the competition’s history in its own right.

It came from this most coached and calculated of performances. Madrid did not need the chaos of early rounds because, after an ultra-defensive first 20 minutes, they were so controlled. 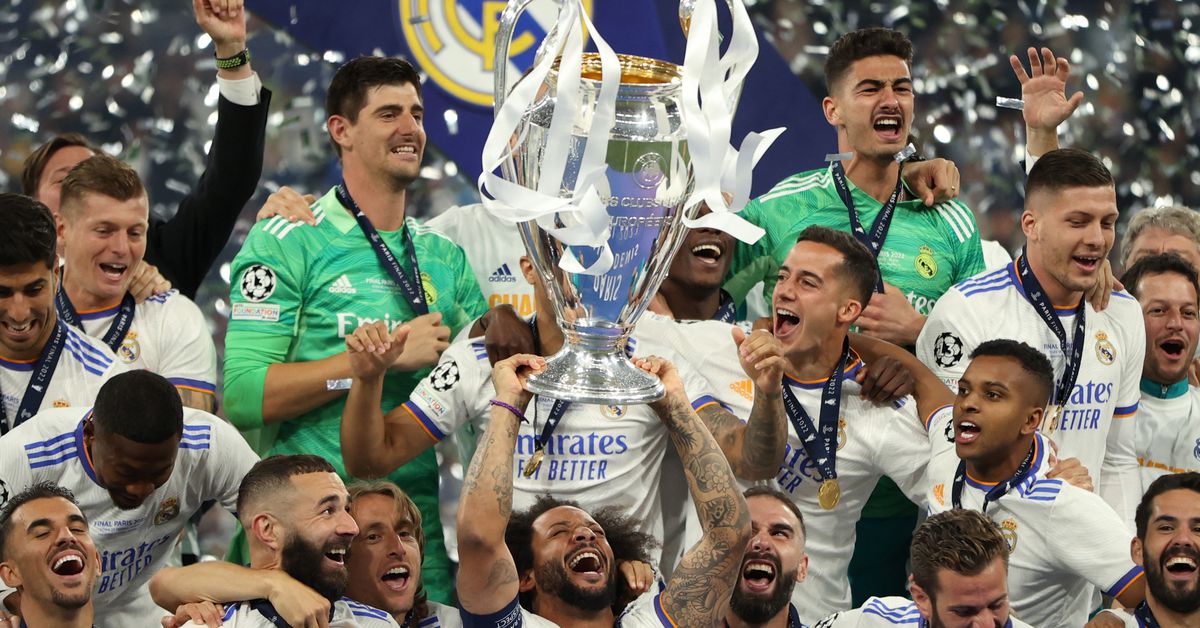 Liverpool’s quest to win every cup this season came undone against Madrid’s apparent ability to win almost every Champions League. It is remarkable and now stands at five in the last nine years. Not even Liverpool’s sense of magic in this competition can match that, and they failed to produce any here, their hopes falling – it must be said – through the gap left by Trent Alexander-Arnold for Vinicius’s winner.

Liverpool were too disconnected, and just didn’t have Madrid’s assurance, particularly that of goalkeeper Thibaut Courtois. He surpassed even goalscorer Vinicius with his influence on the game. It was three fine saves, sure, but it was also the sense of authority he radiated.

It meant, even though Liverpool had much more of the play – and so many more shots – you couldn’t really say they deserved to win. Madrid even had the greater sense of grievance from Karim Benzema’s disallowed goal.

It is probably just as well it didn’t matter given the debate, but it was important in terms of the feel of the game. Before it, Liverpool had been on top. After it, there only looked one winner.

The moment had come after a period where Madrid managed to make a stand in the game, or – if you wanted to be uncharitable – brought Liverpool down to their level.

The early stages did make it feel like the Spanish champions were considerably inferior to England’s second-placed side in general play. Liverpool had been dominant, creating a series of half-chances, and forcing Courtois into two saves of quality. The first had been a fine reflex stop to deny Salah’s improvised attempt. The second such a strong hand to push a Sadio Mane thunderbolt onto the post. © Provided by The IndependentVinicius celebrates scoring the only goal (Getty Images)

It should have been encouraging for Liverpool on the night, but only felt ominous given the season. The lesson of this season has been that such spells are as often a prelude to something that shouldn’t be possible from Madrid. Except, once they’d withstood the early stages, this wasn’t exactly a defiant stand from Ancelotti’s side. It didn’t need to be. 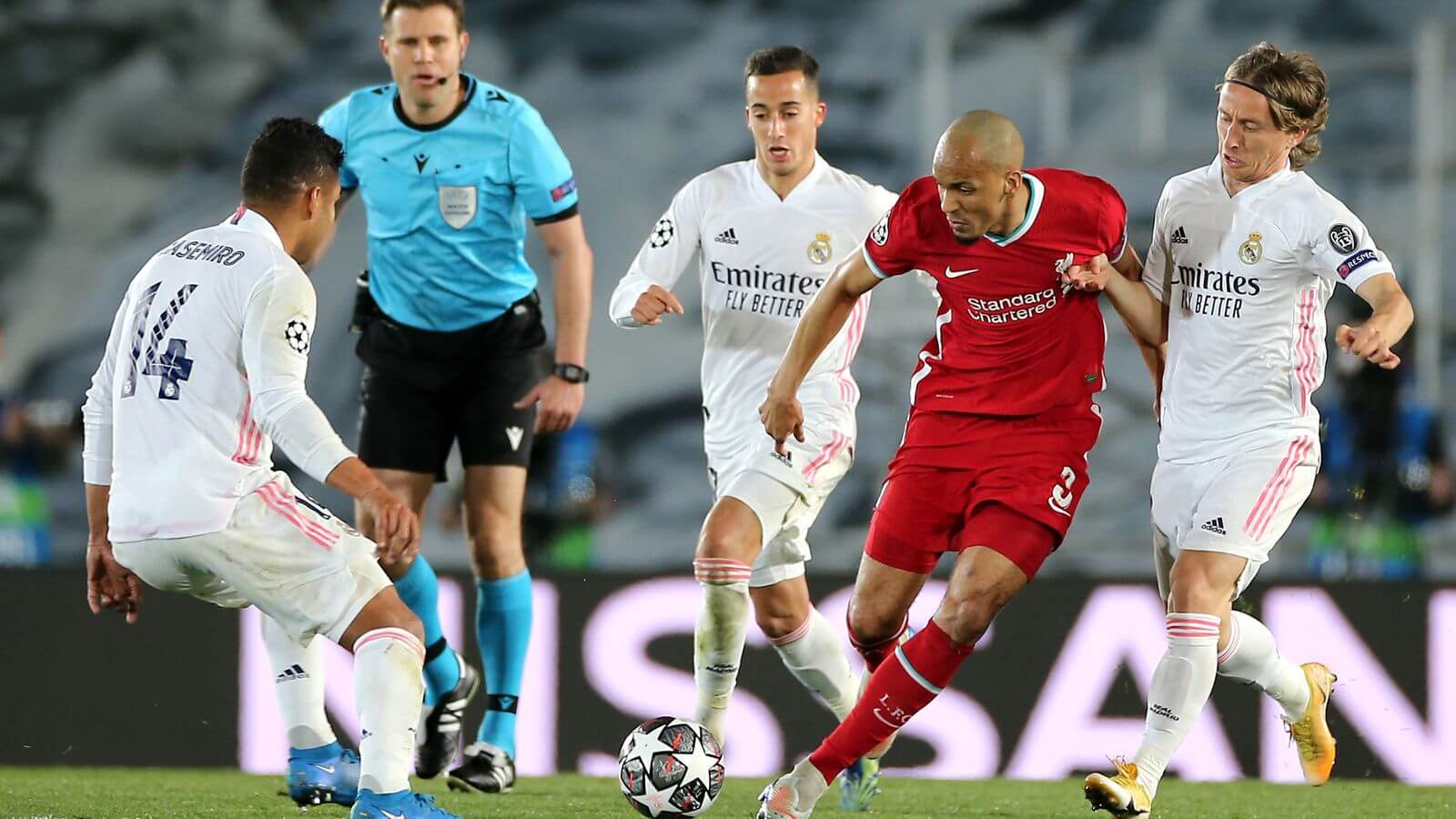 Liverpool got worse and got sloppier. Thiago misplaced a pass. There was little connection between the attackers. Luis Diaz was unpredictable in an erratic way rather than unpredictable in an exciting way. It meant gaps were appearing, which led to that initial offside goal. Liverpool didn’t heed the warning.

Both moments came from moves towards Liverpool’s left, but it was a pass to their right that really punished them. That was where the biggest gap of all lay, and it had little to do with the disconnection of the performance. It was just rank bad defending from Alexander-Arnold.

He barely looked at Vinicius as Fede Valverde surged down the right, leaving the Brazilian in yards of space. It was incredible. Valverde’s pass still had to be good though. He threaded it through a series of bodies, leaving Vinicius to finish with ease. So much for Alexander-Arnold’s pre-match statement that he always feels he “can see things others can’t see”. He was possibly the only person in the Stade de France who didn’t see Vinicius surging in behind him.

It wasn’t just the scoreline that had changed, so did the entire feel of the game. Liverpool, already wary, now looked agitated. The pressure immediately built, getting worse with every failure to build an attack. They were making so many bad decisions once they got near the box, be it the wrong pass or a poor shot. One blazed effort from substitute Naby Keita seemed to sum up the performance.

In the midst of all that, the otherwise underwhelming Salah tried to do it all himself. He broke through, only to find Courtois impenetrable. The goalkeeper pulled off another superb save. Courtois had been the clear man of the match, asserting that with one strong catch. Such a hold summed up the match, if not the season.

The chaos that brought Madrid here meant they were too controlled once they arrived. It all means the European Cup goes back to the Bernabeu again.

The wonder is whether Kylian Mbappe was watching. Some at Madrid will care about that on the night. Many Liverpool fans won’t care to see the Stade de France any time soon.

Madrid and Ancelotti, however, yet again make football history.