The Guardian: Up to 100 Ukraine troops could be dying in Donbas each day, says Zelenskiy 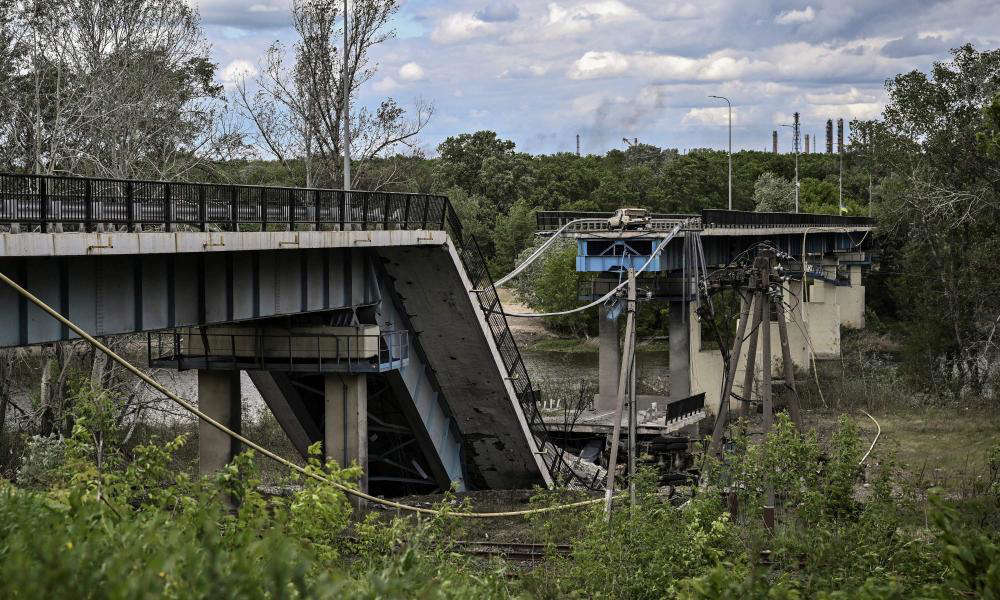 Ukraine’s president has given an insight into the level of losses being suffered by Ukrainian forces in the Donbas, saying between 50 to 100 Ukrainians could be dying every day.

While Ukraine and its allies have made much of Russian losses since the war began, the issue of Ukrainian casualties has been something of a black hole.

The heaviest fighting is focused around the twin cities of Severodonetsk and Lysychansk in Luhansk, one of the two provinces that make up the Donbas.

“Today, from 50 to 100 people could be killed here in the most complicated area, in the east of our country,” Volodymyr Zelenskiy said on Sunday evening.

Serhiy Haidai, the governor of Luhansk, said in a local television interview that Russia was using “scorched-earth” tactics in the region and that Severodonetsk had been attacked from “four separate directions”, though Russian forces had not succeeded in breaking into the city.

The Donbas has been the scene of recent heavy fighting involving intense shelling by both sides, with Zelenskiy’s remarks appearing to be a reference to fatalities in combat. The high recent death toll on the Ukrainian side also suggests an even larger number of non-fatal casualties.

Historically a ratio of one killed in action to three wounded was regarded as a rough rule of thumb for assessing casualties, although better field medical treatment and evacuation, not least for US forces in theatres such as Afghanistan and Iraq, resulted in a far higher survival rate from injuries that would once have caused deaths.

Russia to Build Up Military Presence Along Western Border

According to a policy briefing paper published by the Belfer Center in 2014: “The ratio of wounded to killed in battle has increased dramatically as a result of improvements in medical care in conflict zones. This shift is particularly relevant for technologically advanced countries such as the United States, which invest significant resources in military medicine.”

The new estimate came as Kyiv also revealed its worst military losses from a single attack of the Ukraine war on Monday, saying 87 people had been killed last week when Russian forces struck a barracks housing troops at a training base in the north.

The disclosure that scores had been killed in the attack demonstrated Russia’s ability to inflict huge losses, even far from the front. Previously, Kyiv had said eight people died in the 17 May strike on the barracks in the town of Desna.

“Today we completed work at Desna. In Desna, under the rubble, there were 87 casualties. Eighty-seven corpses,” Zelenskiy said during a speech made by video link to business leaders in Davos, Switzerland.

Moscow had said at the time that it hit a training base with long-range missiles. The toll Zelenskiy announced on Monday was more than double the number killed in a similar attack on a Ukrainian training base in Yaraviv in the west in March.

The updated death toll from Desna emerged following recent remarks by senior Ukrainian officials, including the president, that warned of increasing bloodshed in the next phase of the conflict, amid anticipation of a Ukrainian counteroffensive later in the summer.

Zelenskiy’s acknowledgment of the increasingly heavy toll on Ukraine’s military follows claims by the UK’s Ministry of Defence that since Russia invaded Ukraine, it has probably suffered a similar death toll to that experienced by the Soviet Union during its nine-year war in Afghanistan, although those claims could not be independently verified.

Like Ukraine, western allies including the UK have tended to emphasise Russian losses while avoiding the issue of Ukrainian losses as part of the information war with Moscow that appears in part aimed at trying to shift Russian public opinion against Putin’s invasion.

A combination of “poor low-level tactics, limited air cover, a lack of flexibility” and a command approach that is “prepared to reinforce failure and repeat mistakes” has led to the high Russian casualty rate, British intelligence said in its latest report released on Monday morning.

Casualties are continuing to rise in the Donbas offensive, the report added. “The Russian public has, in the past, proven sensitive to casualties suffered during wars of choice. As casualties suffered in Ukraine continue to rise they will become more apparent, and public dissatisfaction with the war and a willingness to voice it may grow.”

Up to 100 Ukraine troops could be dying in Donbas each day, says Zelenskiy (msn.com)