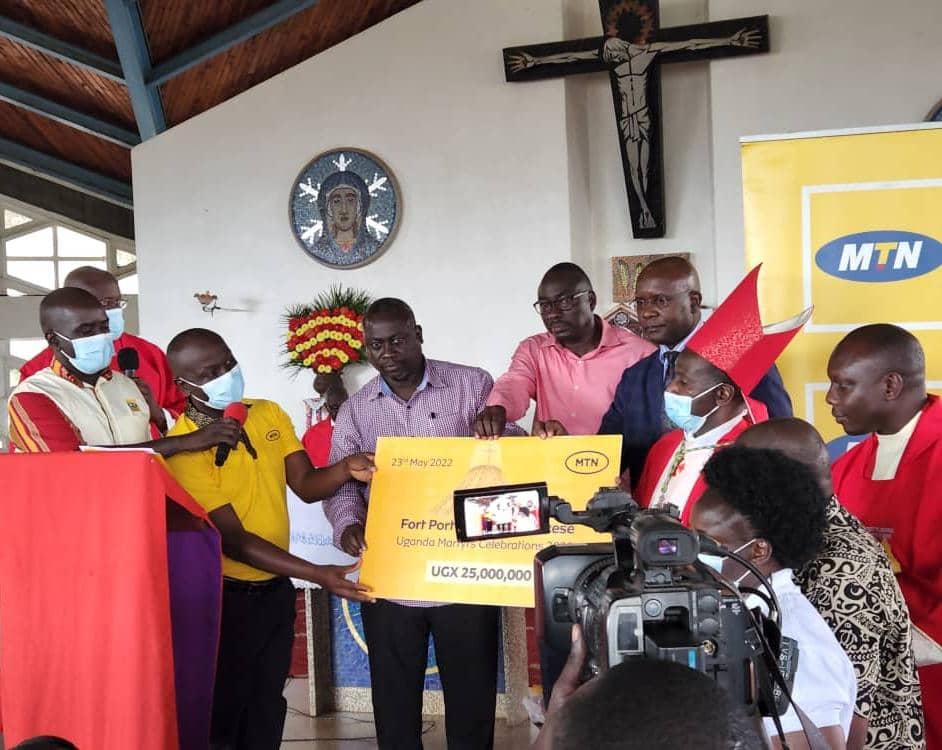 MTN Uganda yesterday handed over a cheque of Ugx.25Million shillings to support the Roman Catholic Diocese of Fort Portal as it prepares to lead the Uganda Martyrs Day celebrations that are set to be held at the Namugongo Catholic Shrine in Central Uganda on the 3rd of the next month.
The Roman Catholic Diocese of Fort portal Catholic is set to lead this year’s Martyrs’ Day that shall be guided by the theme, “Baptized and Sent to Witness Christ with Love and Hope”.
This support is hinged on a long-standing relationship between MTN and the Catholic fraternity, that has seen MTN extend support to its initiatives over the past years.
Joseph Bogera, MTN Uganda’s General Manager for Sales and Distribution handed over the cheque to the Fort Portal Catholic Diocese, on behalf of the MTN Uganda Chief Executive Officer, Wim Vanhelleputte.
Bogera congratulated the Fort Portal Diocese upon all the preparations it had embarked on as it gears up to lead this year’s celebration of the Martyrs, and also wished them blessed deliberations.
Bogera later joined the Bishop of Fort Portal Diocese, Rt. Rev. Robert Muhirwa in flagging off over 2,000 foot-pilgrims from Fort Portal to Namugongo in Wakiso district to commemorate the Uganda Martyrs Day, alongside other Catholic faithful from far and wide.
Last week, MTN Uganda handover Ugx.10Million shillings, aimed at supporting the Catholic Archbishop, Paul Ssemwogerere as he prepares for his maiden Martyrs’ Day celebrations in the capacity of the Roman Catholic Archdiocese of Kampala. Ssemwogerere was appointed to this position by Pope Francis on 9 December 2021. He was installed as Archbishop of Kampala on 25 January 2022.
MTN will sponsor the broadcast of activities leading up to Martyrs’ Day celebrations, as well as the proceedings of the actual day on local TV stations in a bid to enable the people who might not be able to convene at the Namugongo Catholic Shrine to keep up with the celebrations remotely.