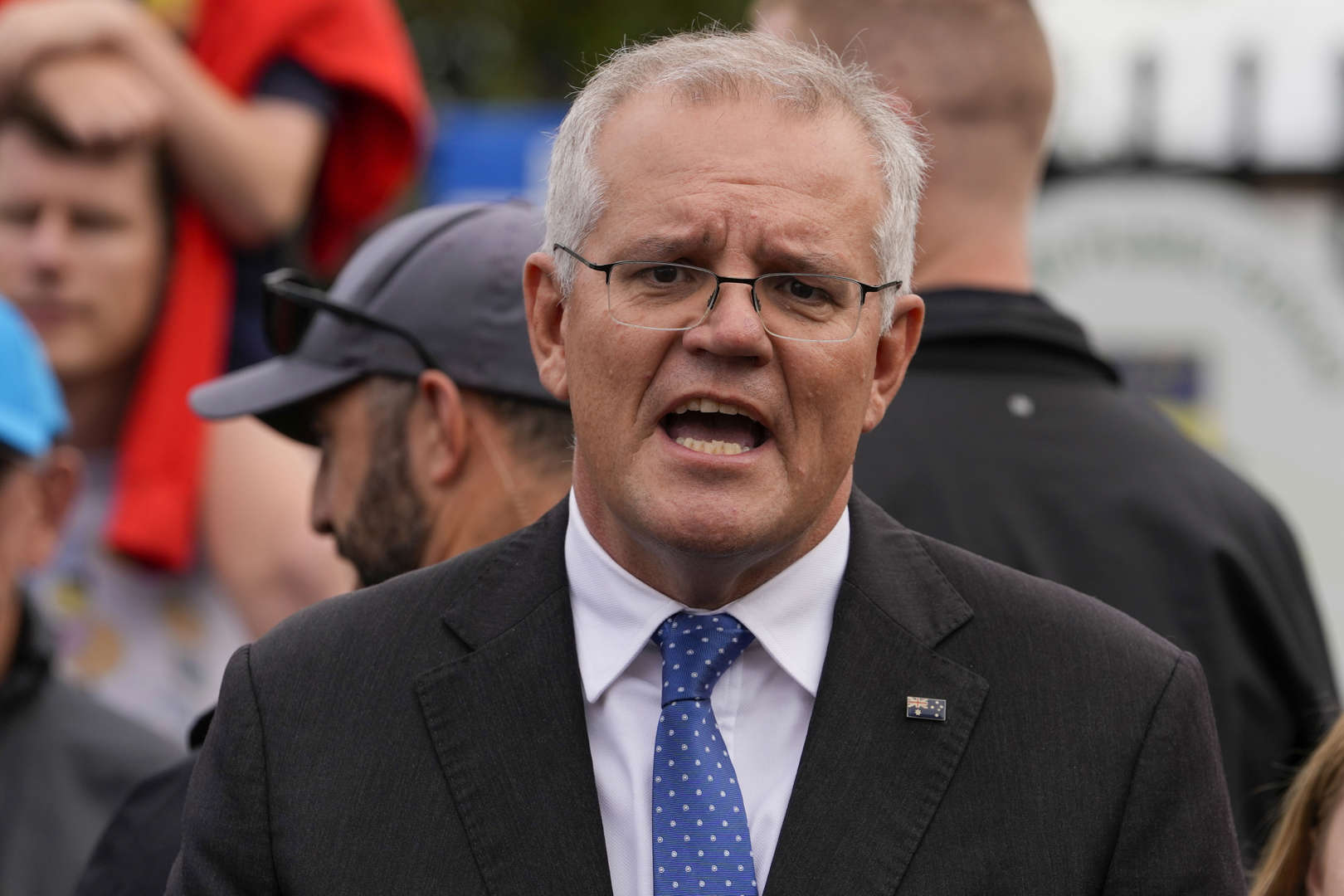 SYDNEY — Australia delivered a stinging defeat to the ruling conservative coalition on Saturday in what amounted to a personal rebuke of Prime Minister Scott Morrison’s abrasive brand of leadership.

The result paves the way for opposition leader Anthony Albanese to become the next prime minister, local broadcasters reported. But it was unclear whether his center-left Labor Party would win an outright majority or be forced to negotiate with a handful of independent and Greens candidates elected on platforms of combating climate change.

Australians faced a stark choice between the combative conservative incumbent and the progressive challenger who promised a sunnier style.

Polls suggested that Morrison’s pugilistic approach to governance had exhausted Australians, hampering his Liberal-National coalition as it aimed to reach a decade in power. Morrison, who took office in 2018, admitted before the election to rubbing some people the wrong way. He compared himself to a “bulldozer.”

Albanese described himself as a “builder” who would boost wages and broaden opportunity. But after early stumbles, it was unclear for much of Election Day whether he had built enough momentum to oust his sharp-elbowed rival.

Many voters said they were rejecting both major parties, however, a disillusionment that appeared headed for a record level this election. Greem voters Amy Knox and Evan Solomons with their two children after voting in Anthony Albanese’s electorate of Grayndler, in inner-city Sydney.

In Albanese’s electorate of Grayndler in inner-city Sydney, Amy Knox and Evan Solomons, both 36, said they voted for Labor in 2019 but were now going with the Greens because of climate change concerns.

“Both major parties have been really uninspiring” on the issue, said Knox, an attorney at a community legal center. “The whole thing is pretty uninspiring, to be honest.”

Under Australia’s preferential voting system, Albanese would almost certainly end up benefiting from their votes anyway. As the couple led their two children through a rainy graveyard plastered with political signs, a Labor Party poll worker offered their 3-year-old daughter a “Vote Albo for PM” sticker, which she hesitantly accepted. “Hopefully it’ll be a collector’s item,” he said.

In the wealthy Melbourne electorate of Kooyong, there was equal uncertainty about anger toward the major parties, but also an alternative with a strong chance of winning.

Kooyong is traditionally a safe seat for the right-of-center coalition. But Josh Frydenberg, Morrison’s treasurer, faced a stiff challenge from one of a slate of climate-focused independent candidates.

All 10 voters who spoke to The Washington Post at Camberwell Primary School on Saturday morning said they were voting for the independent, Monique Ryan, a children’s neurologist.

“I believe in all her ideals, especially for climate action and especially for the integrity of the parliamentarians,” said Anne Byrne, 87, a nun and retired teacher. Like other “teal independents” — they tend to support the free-market policies of the blue conservative coalition although they also have a green focus on climate — Ryan has said she will push for an independent commission to investigate claims of wrongdoing against federal politicians.

“I voted for her because the House of Representatives needs a bit of a shake-up,” said Kathryn Beasley, 24, an aged-care worker. “With an independent, you’ll be able to break up the two-party dynamic.”

Some voters in other areas said they wished they had a similar choice.

“If I had an independent to vote for here, I would vote for them,” said Matt Freeman, 54, as he prepared to cast his ballot in Chisholm, another coalition-held electorate in Melbourne that is being fiercely contested. He normally votes Liberal but was leaning toward Labor, citing climate change and corruption concerns.

Ultimately, analysts said, the question is which major party will best withstand that disillusionment.

“I don’t think there is an enthusiastic embrace of Albanese,” said Paul Strangio, a political historian at Monash University. “But he’s been able to convince the electorate that he’s not a threat, that he represents safe, cautious change, and therefore is a tolerable alternative.”

The election will probably be close, analysts say and could end in a hung Parliament, in which neither major party achieves a majority and must court independent or minor party candidates to form a government.

Up for grabs are all 151 seats in the House of Representatives. The coalition currently holds a one-seat majority in Parliament’s lower chamber. Labor needs to pick up seven seats to form a government. Forty of the 76 seats in the upper chamber, the Senate, are also up for election.

The contest comes at a tense time Down Under. The land of “no worries” has become, well, worried. Australians, normally among the most optimistic people on the planet, have grown increasingly dissatisfied with their lives and concerned about their future, recent polling shows.

The world’s 13th biggest economy is going strong, as exemplified by Morrison’s gleeful announcement this week that unemployment had dropped to the lowest level in half a century. But inflation, equally strong, means many Australians are effectively earning less by the day.

Mark Kenny, a professor of politics at Australian National University, described the prevailing mood as “fatigue, uncertainty, a little bit of fear.”

“Things like an increasingly assertive China, the war in Ukraine, the cost of living crisis,” he said. Morrison “has tried to leverage these things and package them all up into an overall atmosphere of uncertainty that will only be added to if you change government.”

But those warnings against change did not appear to gain traction. Polls consistently showed Labor with a lead going into the election.

A year ago, Morrison, 54, appeared to be cruising toward reelection thanks to Australia’s early success in keeping out the coronavirus. But a slow vaccine rollout and outbreaks of the delta and omicron variants renewed criticism over his crisis management — a subject that first flared when Morrison went on holiday during devastating bush fires in 2019 and 2020.

When questioned about his absence, his reply — “I don’t hold a hose, mate” — fed into criticism that Morrison is slow to act but quick to dodge blame. Those complaints resurfaced in March, when the prime minister waited more than a week to declare a national emergency over historic floods.

The prime minister has also faced credibility issues. Last year, French President Emmanuel Macron accused Morrison of lying over a scrapped submarine deal. Then came a flurry of attacks from within the coalition, including leaked text messages describing him as a “horrible person” and “complete psycho.”

“I have a distrust of Scott Morrison,” said Simone Gupta, 48, shortly after voting for teal independent Allegra Spender in another crucial battleground, the Sydney beach electorate of Wentworth. “It’s his mishandling of the treatment of women in government.”

Morrison’s party has faced a series of scandals, including an allegation by a former coalition aide that she was raped by a colleague in Parliament in 2019. The accusation sparked nationwide demonstrations for gender equality, a demand Gupta said the government hadn’t met.

“Morrison has clearly lost the support of large part of the electorate, particularly women,” said Strangio.

Morrison’s deputy, Nationals leader Barnaby Joyce, tried to defend the prime minister this month by likening him to a dentist.

“You don’t have to like your dentist,” Joyce said. “You just have to believe they are competent.”

ScoMo, as the prime minister is known here, is a former marketing executive who defied the polls three years ago by stoking fear over Labor’s then-ambitious agenda.

“He’s incredibly good at creating images and using words to achieve his political aims,” said Sean Kelly, a former Labor adviser who wrote a book about Morrison. “What’s happened over the last three years is that people have begun to see through that.”

Like Joe Biden in the 2020 U.S. election, Albanese, 59, appears happy for the election to be a referendum on his divisive opponent, Strangio said. And like Biden, he has emphasized empathy and unity.

“He’s an appropriate foil to Morrison,” Strangio said. “Albanese presents himself as someone who is dogged, who will act, who will take responsibility.”

The Labor leader has run a small-target campaign, paring back some of his party’s more divisive policies — such as cuts to carbon emissions — and eschewing others to avoid a repeat of Labor’s shock loss in 2019. That has led to accusations that Albo, as he is called, lacks ambition. But it’s also left Morrison with little to aim at.

The approach also posed a risk for Albanese, who started the race as the far lesser known candidate and struggled to introduce himself to voters. He tripped over an early question on unemployment but appeared to slowly find his feet — and his voice. In recent weeks, Albanese has called for a one-dollar hike to the minimum wage — a move Morrison says would hurt small business owners.

“I lead a team that will give Australia a government which Australians will be proud,” Albanese said Saturday as he voted at a local library. “My big concern with this government is, what’s there to be proud of?”

Morrison interrupted final campaigning to announce two boats of Sri Lankan asylum seekers en route to Australia had been intercepted. The prime minister, who has boasted about stopping such boats, said it was a sign he should be reelected.

“Keep our borders secure by voting Liberal today,” his party said in a mass text sent to voters in key seats.

The election is unlikely to alter Australia’s close relationship with the United States, said Rory Medcalf, head of the National Security College at the Australian National University. And despite the prime minister calling Albanese’s deputy a “Manchurian candidate,” Labor had given every indication it would continue the coalition’s tough policies toward Beijing.

There were some signs that the coalition’s anti-China rhetoric was cutting through, however. In the tightly contested electorate of Reid in inner-city Sydney, Nancy Raad, 67, said she was voting for the coalition. Asked why, her husband interjected.

Many of the voters around her were Asian-Australian. And race had played a contentious role in the election, with the coalition candidate, Liberal incumbent Fiona Martin, appearing to confuse her Labor opponent, Sally Sitou, with a different Asian-Australian politician. Martin denied it.

Australia’s Parliament remains disproportionately White and male, something some voters behind Raad said needed to change.

“I mean, look around,” said Dee, an Asian-Australian voter who declined to give her last name, as she gestured at the diverse line of voters. “And then look at the candidates.”