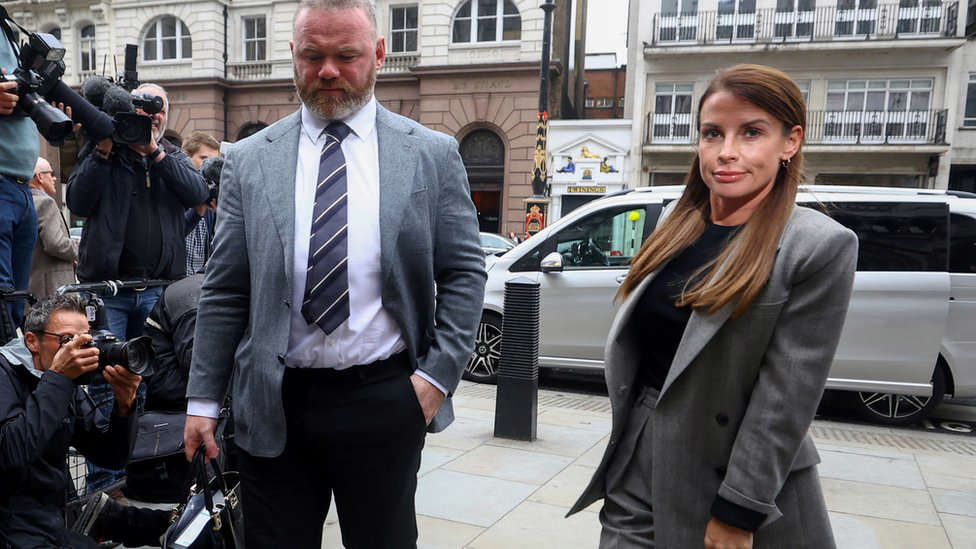 Coleen Rooney has said her suspicions that Rebekah Vardy was responsible for leaking stories about her were raised after Mrs Vardy messaged her asking why she had been unfollowed on Instagram.

The court heard that Mrs Vardy messaged Mrs Rooney to ask why she had unfollowed her on social media.

Mrs Rooney said that this “added to the suspicions that I had” that Mrs Vardy was passing information to the press.

She said she “told a fib” when she informed Mrs Vardy that she did not know how the unfollowing had happened, but said keeping the real reason secret was important to her sting operation.

At the time, Mrs Rooney was trying to identify which of her followers was leaking information about her to the Sun.

Mrs Rooney told the court she had posted several general warnings on social media about someone leaking stories, but the person responsible had not come forward.

The court heard Mrs Rooney told Mrs Vardy that she had not realised she had unfollowed her on Instagram and that it might have been one of her children by accident.

To which she replied: “I didn’t want to because I had put warning signs out there and Mrs Vardy, or whoever was on her account, never came to me and said ‘it was me that has been passing information onto the Sun’.”

She added: “At that time I didn’t think she [Mrs Vardy] would tell the truth anyway, even if I confronted her.”

Mrs Rooney reiterated that the pair, whose husbands Wayne and Jamie both played football for England together, were “not good friends”, and that if someone had unfollowed her she “wouldn’t have been that bothered really”.

“I felt it was suspicious. Obviously I had suspicions in other ways, so this just added to the suspicions that I had,” she said.

Mr Tomlinson put it to Mrs Rooney that she had lied in her reply to Mrs Vardy by saying she did not know how the unfollowing had occurred.

“Yes, it was a cover-up for what I was investigating,” Mrs Rooney said.

“I had my suspicions that Mrs Vardy could be doing this from her account and when I received that message it made me realise even more that it was suspicious, and I did tell a fib.”

Mrs Rooney added that while she accepted it might have been someone else with access to Mrs Vardy’s account, she believed that Mrs Vardy “knew all along”.

The “right thing to do”, Mr Tomlinson argued, would have been to tell Mrs Vardy about her suspicions.

She added: “This person [the leaker] was not paying attention to me giving warnings.”

The court heard that Mrs Rooney asked PR officer Rachel Monk in 2019 to find out who was the source of a story about her and her husband securing a babysitter.

Mr Tomlinson suggested it would have been easier for Mrs Rooney to simply delete Mrs Vardy from her Instagram. “Maybe, but I didn’t,” she replied.

Mrs Rooney also told the court it was “quite hard” keeping her investigation to herself, not even telling her husband. “One thing I don’t do is put my troubles or my worries on anyone else,” she said.

She added she thought she had “got away” with her investigation, without Mrs Vardy knowing about it, but that messages revealed during court proceedings have shown that “obviously she was on to me”.

Mr Tomlinson said the data download, given in evidence, showed Mrs Rooney had posted 50 stories available only to Mrs Vardy’s account. He described it as a “serious and concerted operation”.

Mrs Rooney, the court heard, was alerted to the fact that The Sun were to publish one of them – a “totally untrue” story about her looking into gender-selection treatment – but she said she wanted the newspaper to go ahead so that she had “evidence”.

She claimed “it wasn’t hard” to carry out the sting over a number of months, but that “it worked for me and I found out which account was doing it at the end of it.”

Read more about what happened in week one of the trial

The so called Wagatha Christie case was sparked by a viral social media post from October 2019, in which Mrs Rooney said she had carried out a sting operation to find out who had been passing private information about her life to the Sun.

She said the fake stories she had posted on Instagram in an effort to find the perpetrator had only been viewed by “Rebekah Vardy’s account”.

Mrs Vardy has continually denied the allegation. But during the trial last week appeared to concede her agent Caroline Watt may have a leaked a story about Mrs Rooney.

Mrs Rooney’s brother, Joe McLoughlin and her husband Wayne’s agent Paul Stretford are also due to give evidence on Monday.

The 10-day trial continues until Wednesday.