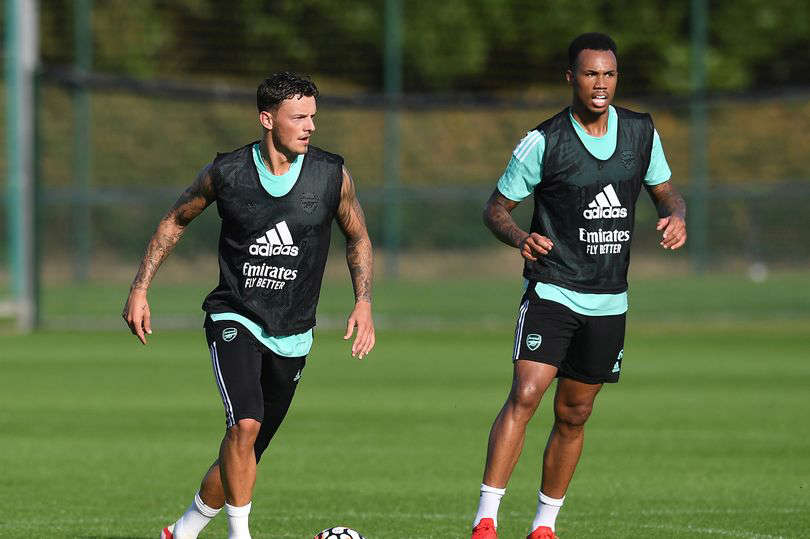 Mikel Arteta will be sweating the fitness of both Ben White and Gabriel Magalhaes on Monday as Arsenal face Newcastle in a must-win game.

The Gunners travel to Newcastle with the knowledge that anything other than three points could cost themselves a Champions League place for next season after they were thrashed 3-0 by Tottenham on Thursday. Ben White was an unused substitute in that game as he is struggling to return to full fitness, and the Gunners winced further as Gabriel pulled up with injury late on.

Rob Holding’s red card had already left Arteta short of defensive options after he was dismissed against Tottenham. But both White and Gabriel were absent in training, and will receive late fitness tests before Arteta determines whether they will face Newcastle on Monday.

It could be a very makeshift centre-back partnership for Arsenal if both White and Gabriel are both deemed unfit, and that will be music to the ears of Tottenham, who are dreaming of a slip-up. Although a spot in the top four is still in Arsenal’s hands, the momentum has swung yet again, and the pressure is on Arteta and his side.

Tottenham have done all that they can, after they edged Burnley 1-0 on Sunday, and anything other than an Arsenal win will see them head into the final day of the Premier League season in fourth spot. But both Gabriel and White have traveled up to Newcastle with the rest of the squad, providing hope for the Gunners.

The pair will be assessed late, and due to the importance of the game they may even be risked by Arteta. Arsenal have the luxury of playing their final game of the season at home, placing further importance on taking three points away at Newcastle.

Even though Arteta may be forced into taking a risk, he has already hinted that he could tinker with his back-line, and make some ‘modifications’ for Monday’s game. He revealed: “We will have to modify certain positions to try to make it work because we don’t have more defenders.

“And even the academy players that we have they haven’t experienced a lot in those positions because they are not specified central defenders. So it’s something we will try to find a way around.”

Granit Xhaka has played at both left-back and centre-back during his time at Arsenal, and the versatile Takehiro Tomiyasu could be used in a central role. The Japan international plays centrally for the national team, but plays on the right for Arsenal in an ideal situation. But Arteta will be hoping at least one of his regular starters is fit in order to make his life easier, and it’s likely that Eddie Howe will be using this problem to his advantage as Newcastle prepare to cause an upset. The Magpies have turned things around since Howe was appointed, and have made St James Park a fortress in 2022.

Until their 1-0 defeat to Liverpool they had won six consecutive games at home, and they’ll want to produce a solid performance in their final home game of the season. Chris Wood will be fancying his chances against a potentially weakened defence, and Allan Saint-Maximin could pose a major threat.

But it’s simple for Arsenal, win the match and head into the final game of the season with a major advantage. Failure to win however, and Tottenham may just punish them in brutal fashion.