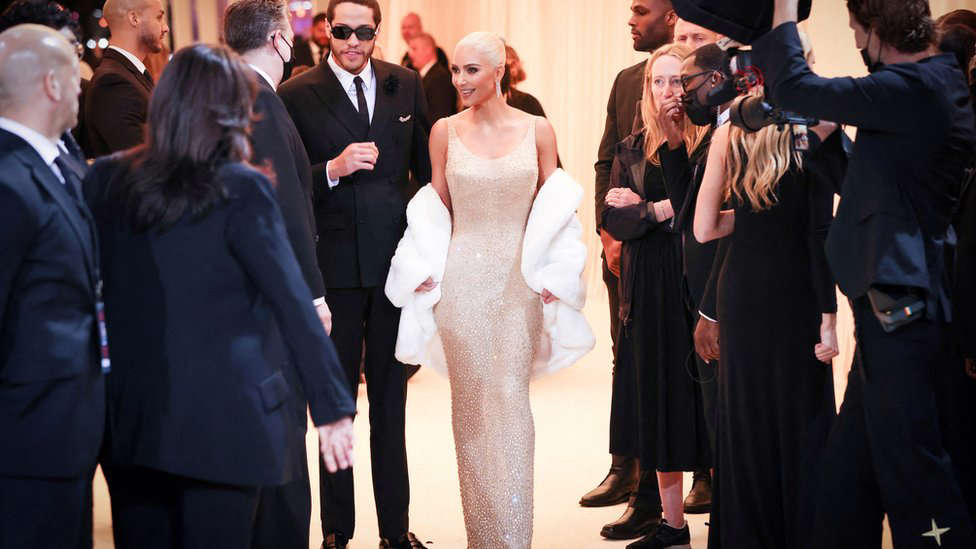 Kardashian said she had been “determined” to fit into the dress

Kim Kardashian has been accused of sending a damaging message about dieting, after saying she had lost 1st 2lb (7.3kg) in three weeks to fit into a dress once worn by Marilyn Monroe.

The reality-TV star said it had been “such a challenge”, adding: “I didn’t starve myself – but I was so strict.”

Nichola Ludlam-Raine, of the British Dietetic Association, said portraying such a regime was “irresponsible”.

Kardashian wore the crystal-embellished gown to the Met Gala, on Monday.

Monroe wore it when she sang Happy Birthday to US President John F Kennedy, in 1962.

Kardashian told Vogue: “I tried it on and it didn’t fit me – I said, ‘Give me three weeks.’

“I was determined to fit it – I haven’t had carbs or sugar in about three weeks.

“We’re having a pizza and doughnut party back at the hotel [after the fashion gala].

“I would wear a sauna suit twice a day, run on the treadmill, completely cut out all sugar and all carbs and just eat the cleanest veggies and protein.”

Even then, Kardashian could not zip up the dress at the back.

She was criticised on social media, including by Riverdale actress Lili Reinhart, who wrote on her Instagram story it was “so wrong” to talk about going on a crash diet “when you know very well that millions of young men and women are looking up to you and listening to your every word”, according to E!