Islamabad: The federal capital’s air quality was recorded clean and healthy after months of polluted air amid declined ratio of hazardous environmental pollutants in the atmosphere after week-long rainfalls lashed out the metropolis, reveals the 24 hours ambient air quality report of Pakistan Environmental Protection Agency (Pak-EPA)’s on Monday. 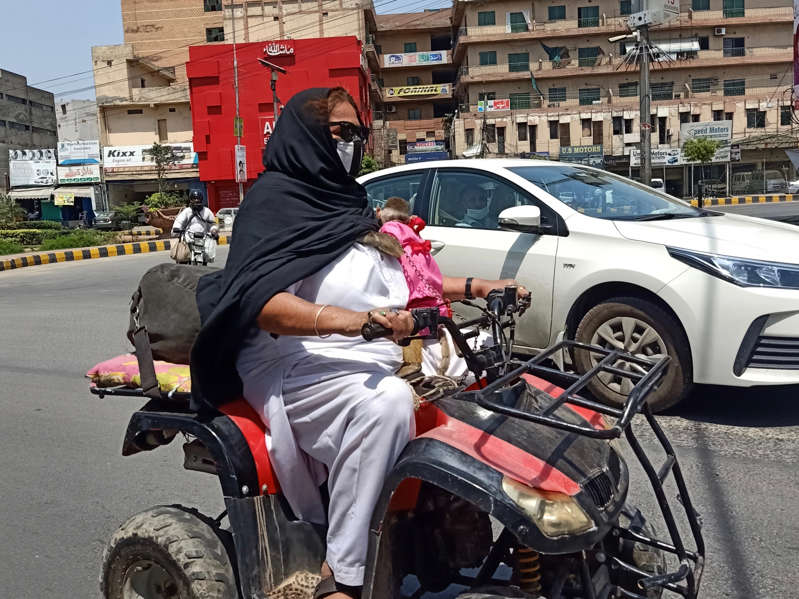 © Getty LAHORE, PAKISTAN – APRIL 29: A woman, with her face covered as a preventive measure against the coronavirus (COVID-19) pandemic, drives a quad bike while carrying a monkey in Lahore, Pakistan, April 29, 2020. (Photo by Muhammed Semih Ugurlu/Anadolu Agency via Getty Images)

The other parameters of daily quality report included SO2 and NO2 which are generally released from industrial emissions.

When contacted the EPA official informed that the air quality remained hazardous due to increased vehicular emissions and prolonged dry weather that resulted in huge accumulation of suspended particles of air pollutants in the atmosphere.

The official further informed that the air quality was healthy for all age groups whereas during bad air or increased pollution the general public was advised to wear face covering outdoors and avoid unnecessary travel in the federal capital.

The recent rainfall was overwhelming in magnitude and recurrence that helped in containing the suspended particles and other ambient air pollutants. She said that the areas along hilly terrain mostly possessed increased propensity of generating air pollution due to the natural topography creating a blockade for winds causing air pollution.

She further informed that one of the major reasons for Capital’s air pollution was large number of vehicles entering the capital on daily basis. The industrial sector particularly steel manufacturing units spewing dark smoke were the troublemakers and had adopted carbon absorbing scrubbers that helped control dark carbon release into the atmosphere, she added.

During the winter season, many local people in the slum areas and CDA sanitary workers were burning plastic or household waste for heating purposes during cold weather which was also increasing air pollution.

The CDA official clearly mentioned that the Authority’s staff was strictly warned to not burn waste whereas the public was encouraged to report it to concerned director for further action if found any staffer burning waste.