By Ronald Kabuubi
Tuesday, 11 January 2022, 8:23
0
38
Share
Facebook
Twitter
Pinterest
WhatsApp
Telegram
172 Views
President Biden plans to deliver a hard-hitting speech on voting rights in Atlanta on Tuesday, saying the issue is fundamental to America, calling for passage of sweeping legislation and denouncing in detail the impact of voting restrictions in states like Georgia.
But in pivoting so fully to voting rights from his recent efforts to pass a major social spending bill, Biden risks opening the new year with a second legislative setback, given the daunting obstacles facing any voting rights package in Congress — including the near-unified opposition of Republicans and the reluctance of some Democrats to ease filibuster rules. 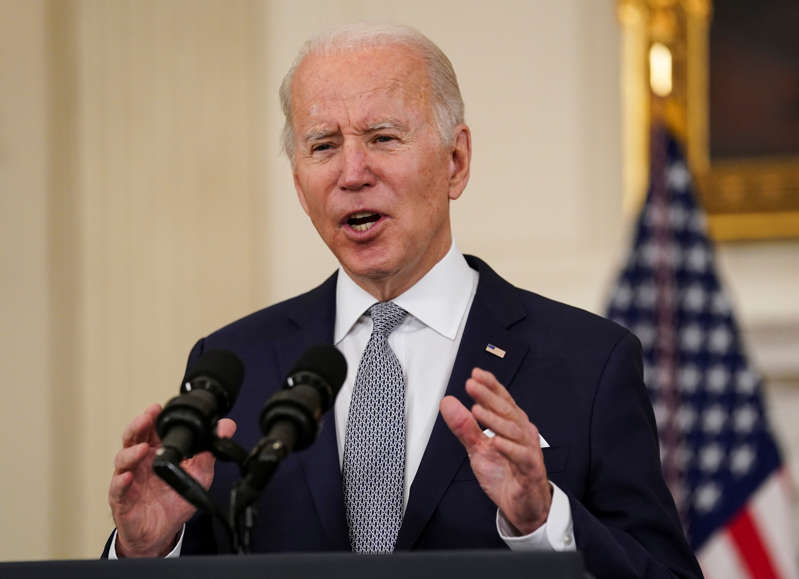 © Thomson Reuters U.S. President Joe Biden delivers remarks on the December 2021 jobs report during a speech in the State Dining Room at the White House in Washington, U.S., January 7, 2022. REUTERS/Kevin LamarqueThe event at Clark Atlanta University and Morehouse College in Atlanta comes after Biden’s speech on the anniversary of the Jan. 6 insurrection at the U.S. Capitol, with White House aides viewing Tuesday’s remarks as a second chapter to last week’s forceful defense of democratic institutions and rebuke of former president Donald Trump’s role in fomenting false claims about his loss in the 2020 elections.Biden is gambling on the limited powers of the bully pulpit to shift dynamics in the Senate that have largely been immovable, as a pair of Democratic senators continue to resist changes to chamber rules that would allow bills to pass on a simple majority vote.

The Atlanta speech also comes as Biden’s ambitious Build Back Better package — which would invest approximately $2 trillion in climate initiatives, health-care programs and the social safety net — remains stalled in the Senate, risking legislative defeats on two major priorities at the start of a midterms yeaThe president’s allies argue that the fight is worth having even if it falls short, given the stakes. Black activists, liberals and other critical members of the Democratic base have urged the White House to fight harder on the issue, and Biden cannot afford to lose their support.

“I think this is a fight that we have to have as a country, even if an outcome I like is not guaranteed,” said Sen. Tim Kaine (D-Va.), who is crafting potential Senate rules changes. “Presidents and leaders of all kinds are measured by the things they’re willing to fight for.”

Senate Majority Leader Charles E. Schumer (D-N.Y.) has signaled he plans to hold a vote this week on changing Senate rules to allow the voting rights legislation to pass with a simple majority, but that seems unlikely to succeed.

Biden on Tuesday will be accompanied by the state’s two Democratic senators, Jon Ossoff and Raphael G. Warnock, and other elected officials in Georgia. He and Vice President Harris — who has been the administration’s point person on voting rights — will also visit the Martin Luther King Jr. Center for Nonviolent Social Change on the eve of the annual holiday commemorating the civil rights leader.

In previewing the president’s speech on Monday, White House press secretary Jen Psaki said Biden plans to “forcefully advocate for protecting the most bedrock American rights, the right to vote and have your voice counted in a free, fair and secure election that is not tainted, by partisan manipulation.”

Ensuring that, Psaki said, can only be done by passing a pair of voting legislation that has repeatedly stalled in the Senate due to near-uniform Republican opposition.

Psaki highlighted the symbolic importance of delivering the remarks in Georgia, the home of the late civil rights hero and congressman John Lewis (D-Ga.) and the epicenter of battles over voting access. The state is being sued by the Justice Department over its GOP-backed elections law signed last year.

“He wouldn‘t be going to Georgia tomorrow — a place where there is enormous history of civil rights leaders, of his friend, John Lewis, advocating for fundamental rights, including voting rights — if he wasn’t ready and prepared to elevate this issue and continue to fight for it,” Psaki said.

Biden, Psaki added, will also discuss his views of the legislative filibuster, a rule of the Senate that requires 60 votes for most bills to pass. Once resistant to any changes, Biden said in an ABC News interview last month that he would support loosening filibuster rules to allow voting rights bills to pass — which would almost certainly be necessary, given the chamber’s 50-50 partisan split.

The White House has come under enormous pressure from activists and key Democratic lawmakers to invest more political energy into the issue, as civil rights groups have lamented for months that the administration had yet to prioritize voting in the way that it has other matters.

In an interview Monday, House Majority Whip James E. Clyburn (D-S.C.) recalled that Biden, in his victory remarks after clinching the presidency in November 2020, pledged to African American voters — who largely revived his presidential campaign in the South Carolina primary earlier that year — that he would always have their backs.

“It takes no political capital to keep your word, and there’s nothing more fundamental to Blacks in this country than the precious right to vote,” Clyburn said. “No group of people in the United States of America has made more sacrifices, given more for the right to vote, than Black people.”

Nsé Ufot, chief executive of the New Georgia Project, said activists needed to see more from the administration than a speech from Biden, suggesting her time would be better spent fighting for results than listening to his remarks.

A coalition of voter advocacy groups, including Ufot’s group, plan to skip Biden’s and Harris’s remarks in Atlanta, with the New Georgia Project doing another event at the state capitol instead.

“If all they are doing is coming to give a speech, then I might have some Republicans to be fighting with at that time,” Ufot said. “What we need is a plan. What we need are marching orders. How are we headed into the midterms? What posture will we have to adopt? And is it worth it to continue to seek federal protections for voting rights?”

Republicans, in Georgia and elsewhere, take a sharply different view, arguing that the voting restrictions passed by several states are aimed at fighting fraud and not limiting the vote. Senate Minority Leader Mitch McConnell (R-Ky.) said on the Senate floor that the high turnout in the 2020 election shows that voting rights are not at risk.

“Leading Democrats say they want to break the Senate because of a sinister anti-voting plot that is sweeping America,” McConnell said. “This is totally fake. It does not exist.”

At least in public, Biden began shifting his priorities in favor of voting rights and away from the stalled Build Back Better package last month, when he said that if Congress can pass a voting package into law, lawmakers should put off work on the spending plan.

Though much of his legislative outreach last year had been focused on his infrastructure and social spending packages, Biden popped up on a virtual call with a handful of Democratic senators last month to encourage continued work on voting rights legislation.

After that video chat, the president telephoned Kaine, thanking him for his efforts on the issue and in drafting a change in the Senate rules that would allow the voting bills to pass. Biden also quizzed the senator on the likelihood of the efforts succeeding and said he considered voting legislation crucial to defending democracy in the U.S.

“He saw it in the same way I am seeing it,” Kaine said. “It’s not just, we’re doing it because it’s a good thing to do. There is sort of a unique, historical burden on our shoulders because of having been here during this [Jan. 6, 2021] attack.”

The Democratic efforts are focused on two bills: the John Lewis Act, which would restore the federal government’s authority to review state voting laws to prevent discrimination, and a broader bill that would create national rules for voting by mail, early voting and other parts of the electoral process.

But to pass either of those measures, Democrats must persuade two members of their own caucus who have long resisted fundamental changes to how the Senate operates.

Sen. Joe Manchin III (D-W.Va.) has signaled some flexibility in relaxing the 60-vote threshold to end a legislative filibuster in the Senate — such as requiring three-fifths of those present, rather than of all 100 senators, to advance legislation. But he remains ardently opposed to changing the rules of the Senate on a party-line basis.

Even if Democrats were able to persuade Manchin, Sen. Kyrsten Sinema (D-Ariz.) also remains stubbornly opposed to getting rid of the 60-vote threshold. She reiterated her opposition in a virtual lunch last week with other Democratic senators, according to a person familiar with her comments, urging other senators to contact her if they wanted to discuss the issue further.

It’s unlikely that Biden’s remarks, even paired with a series of Senate votes later this week, will be enough to meet the demands of activists pressing the administration for a concrete strategy on getting voting rights legislation enacted.

“What we want to see — as opposed to hear — is an outcome where there is legislation on the president’s desk which he can sign to protect the right to vote,” said Derrick Johnson, the president of the NAACP.