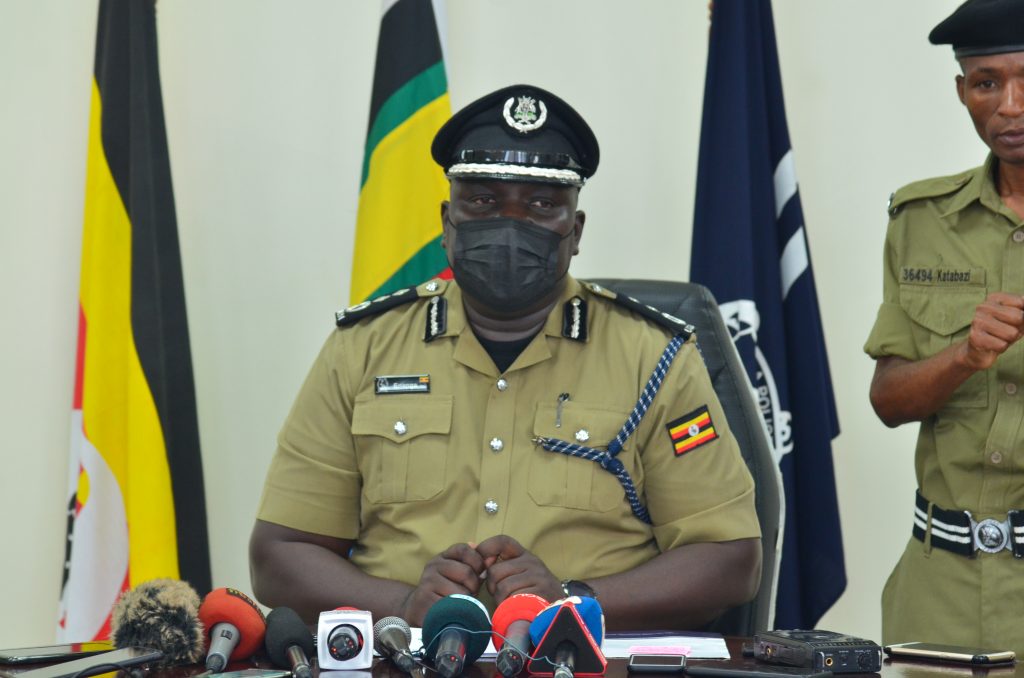 Police Spokesperson Commissioner Fred Enanga.
Following the joint attacks by the Uganda People’s Defence Forces (UPDF) and the Congolese army, Forces Armées de la République Démocratique du Congo that started on November 30, last year, security sources said the ADF leader, Musa Baluku, was badly wounded, and he has since handed over command to Bonge La Chuma.
Sources said Madjaribu, also known as Zakaria Abah Adore, was an Imam at Katindo mosque in the city of Goma, just like his younger brother, Imam Bonge La Chuma, who is said to be the head and chief instructor of the ADF fighters currently.
After his arrest in Goma on December 28 last year, Madjaribu was reportedly detained there for about five days, before he was transferred to Kinshasa on January 2.
“Madjaribu was arrested at the Alaline market in Katindo in the company of a woman whom, it is said, he wanted to marry. He was detained in Goma before he was later transferred to the military criminal intelligence prison (DEMIAP) in Kinshasa,” the source revealed, adding that security operatives were able to identify him using the recognisable scar under his left eye.
Reports indicate that Madjaribu has been behind a number of bomb attacks in DR Congo and that he has been on DRC’s wanted list for years.
Madjaribu is accused of organising a recruitment network for ADF using his numerous minibuses and motorcycles, which he would reportedly use to transport recruits to Beni forest via Butembo in North Kivu.
Beni territory, military sources said, is one of the strongholds of these armed groups, including ADF, with the terror group commanders, such as Musa Baluku aka Seka, Bonge La Chuma, Nasser Adbu Hamid Diiru, Elias Segujja aka Fezza, Sheikh Lumisa and Abdulrahman Wasswa aka PC Sentongo, expected to be hiding in this area.
Attempts to get a comment from the UPDF spokesperson, Brig. Flavia Byekwaso, over the arrest of Madjaribu and what they make of it, were futile.
The overall commander of the ongoing Operation Shujaa, Maj.
Gen. Kayanja Muhanga, recently announced that they had entered phase two of the operation in which he pledged to pursue the ADF on foot within the jungles of eastern DR Congo. Over 100 ADF extremists have been killed since the operation started on November 30.
More than 70 fighters have since surrendered to the Uganda-DRC joint forces.
The joint forces have hit at least six ADF camps, and they took over their biggest camp called Kambi Ya Yua on December 24.
*Recent ADF attacks*
The ADF extremists have been responsible for scores of deaths of civilians in DR Congo over the past few months.
In Uganda, the ADF were responsible for a series of bomb attacks last year, in which four suicide bombers died.
Some five other innocent lives perished in the attacks, which left many with injuries.
The ADF terrorists first attacked Digida pork joint in Komamboga, Kawempe division, on October 23 last year, where a person died.
Two days later, a suicide bomber who was aboard a Bushenyi-bound bus died after a bomb he was carrying exploded at Lungala in Mpigi district.
On November 16, two bombs exploded simultaneously at Kampala Central Police Station and Jubilee House on Parliamentary Avenue in Kampala.
In the attacks, seven people died, including three suicide bombers, the Police said.
*Madjaribu’s earlier arrest*
According to Congolese authorities, Madjaribu escaped from Kangbayi central prison in Beni shortly after his first arrest in 2014.
“He was arrested in 2014 at the Bunyuka barrier (in Bashu) with recruits that he was driving to Madina camp. With Fiston Muhewa, he was one of the bombers in the city of Beni in 2014. He later managed to escape from prison with his brother during the attack in June 2017,” the source quoted Congolese security officers as saying.
After he escaped from Kangbayi, Mudjaribu reportedly received funding from the ADF, and that he managed the terrorist group’s transport department in the jungles of DR Congo.
“After his escape, he felt insecure and left Goma for Bukavu, where he set up a Bukavu-Uvira travel agency. The transport agency was serving the Uvira-Misisi-Kalemie and Uvira-Bujumbura-Tanzania axes. This allowed him to dump many Tanzanian and Burundian recruits in Beni/Rwenzori sector where they were running camps,” the source noted.
Madjaribu is reported to have returned to Goma at the end of 2018 along with Aboudjihad, and he is suspected to have been regularly visiting the ADF camp known as Madina in Beni.
At the end of 2020, he is said to have settled in the enclosure of the Katindo mosque in Goma, where his father, only identified as Bilali, lived.
It was during that time that intelligence services picked information about Madjaribu and started pursuing him
Police Statement:

Police and its sister security agencies have released the identities of 12 suspects arrested in connection to the rebel Allied Democratic Front (ADF).

Enanga said the suspects were picked up from Ntoroko and Kyenjojo districts following heightened security surveillance explaining that this was a result of the heightened security alertness since the Uganda People’s Defence Forces (UPDF) launched an offensive against the ADF rebels in the jungles of the Democratic Republic of Congo (DRC).]

In November last year, the UPDF crossed into DRC following the last year’s bombings in Kampala, which claimed the lives of five civilians and four suspected suicide bombers.

Enanga claimed that because of the destruction occasioned on the ADF, they are angry and have made various attempts to revenge against Uganda.

“We are doing all that is possible to ensure that they don’t attack Uganda. What we have done in these 55 days, has helped to keep Ugandans safe. As we take back children to school, we need to be very careful, ADF might want to strike again,” Enanga said.

At least over 120 people linked to ADF have been arrested since mid-last year. The majority of the suspects are yet to appear in the courts of law.

City lawyer Geoffrey Turyamusiima who has been representing the terror suspects, says that some of them are still locked up at the Special Investigations Division.