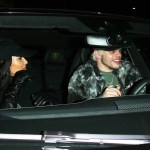 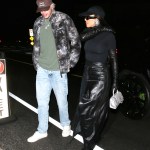 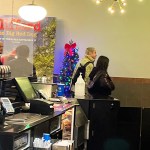 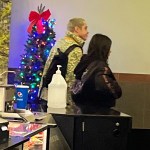 Vacation time! Kim Kardashian and Pete Davidson were all smiles as they touched down in the sunny Bahamas via private jet.

Kim Kardashian and Pete Davidson are taking their romance international! The reality star, 41, and Saturday Night Live actor, 28, were beaming as they landed in the Bahamas on Monday, Jan. 3, after a flight on a private jet. Pete looked head over heels as he sweetly gazed at the SKIMS founder, clearly smitten with the mom-of-four in photos obtained by TMZ.

As always, Kim sizzled in a plunging, halter style black top with side cutouts paired with ripped pair of distressed black jeans. She hung onto a furry black clutch as she made her way off of the plane and to a boat. The couple are staying at a private home owned by publicist and Kim’s close friend Simon Huck, the outlet reported.

Kim Kardashian and Pete Davidson on a date in Los Angeles. (MEGA)

Meanwhile, Pete carried a black leather Louis Vuitton backpack over top a navy blue baseball jacket sporting several patches. He stayed cozy in a beige colored sweatsuit consisting of shorts and a hoodie, along with sneakers. Both wore sunglasses to protect their eyes from the sunny rays in the Bahamas, where temperatures are currently in the high 70s. Earlier in the day, Pete and Kim were seen leaving California.

It appears Kim’s estranged ex-husband Kanye West, 44, is also moving on: the rapper was seen on back-to-back dates with actress and model Julia Fox, 31, in the last week. The pair were initially spotted having a candlelit dinner at Italian restaurant (and celebrity hot spot) Carbone in Miami just ahead of New Year’s Eve.

Just days later, the pair were spotted on another date that included a Broadway show in New York City, followed by a dinner date at the original Carbone in the Big Apple. Kanye already appears to have influenced Julia’s fashion sense, as the 31-year-old wore all Balenciaga for the date — including a pricey Hourglass handbag. Meanwhile, Kanye wore his usual pricey casual ware with a premium eggplant colored hoodie and black Levi’s, along with a Balenciaga jacket and footwear by Red Wing Shoes.