The anti-apartheid veteran’s funeral is set to take place in Cape Town on Saturday 1 January but plans are still in their “infancy”. Meanwhile, world leaders have been paying tribute to the 90-year-old, who died at the Oasis Frail Care Centre on Boxing Day.

Why you can trust Sky News

A week of memorial services has been planned to pay tribute to Archbishop Desmond Tutu.

His funeral is set to take place in Cape Town on Saturday 1 January but plans are still in their “infancy”, a statement from the Archbishop Tutu IP Trust and the Desmond & Leah Tutu Legacy Foundation said. 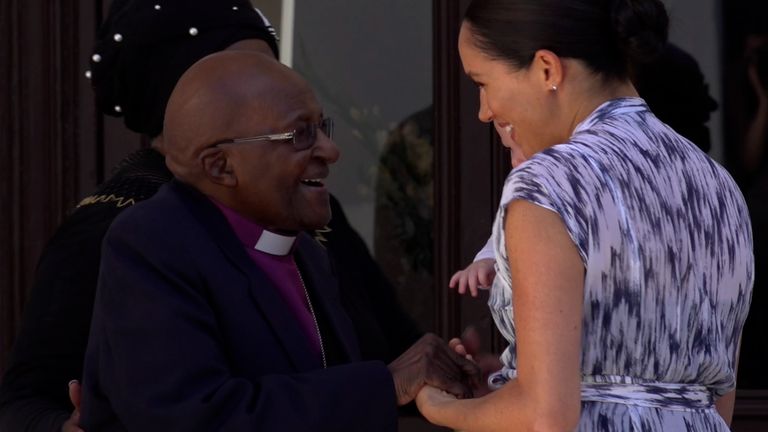 What will the week of memorial services include?

From 27 to 31 December, the bells of St George’s Cathedral in South Africa’s capital will ring for 10 minutes starting at midday in tribute to Mr Tutu, with Archbishop Thabo Makgoba asking all those who hear it to pause and remember him.

On Wednesday 29 December, a memorial service will be held in the city but more details are yet to be announced.

Following that, an “intimate evening” for Archibishop Tutu’s friends and his wife will be held on Thursday, the statement continued.

His body will then lie in state at St George’s Cathedral on Friday to allow people to pay their respects before Archbishop Makgoba leads a funeral service on Saturday.

A Nobel Peace Prize, a ‘rainbow nation’ and the first black bishop of Johannesburg

During his lifetime, Archbishop Tutu was an outspoken critic of South Africa’s previous brutal system of oppression against the country’s black majority, was the first black bishop of Johannesburg, and won the Nobel Peace Prize in 1984 for his human rights work.

In the same year, he celebrated South Africa’s first democratic elections in 1994, calling the country’s multi-racial society a “rainbow nation”.

Mr Tutu also campaigned for LGBT+ rights and same-sex marriage, saying in 2013: “I would not worship a God who is homophobic and that is how deeply I feel about this.

“I would refuse to go to a homophobic heaven. No, I would say, ‘Sorry, I would much rather go to the other place’.”

Launching a campaign for LGBT+ rights in Cape Town, he said he was “as passionate about this campaign as I ever was about apartheid. For me, it is at the same level”.

In the 1990s, he was diagnosed with prostate cancer and had been hospitalised several times in recent years to treat infections associated with his cancer treatment.

Several world leaders paid tribute to Mr Tutu, including the Queen who said the whole Royal Family was “deeply saddened” by his death.

“I remember with fondness my meetings with him and his great warmth and humour,” she said.

US President Joe Biden and First Lady Jill Biden said they were “heartbroken” to discover Mr Tutu had died.

They said in a statement: “We were blessed to spend time with him on several occasions over the past many years.

“His courage and moral clarity helped inspire our commitment to change American policy toward the repressive Apartheid regime in South Africa.”

Former US president Barack Obama tweeted: “Archbishop Desmond Tutu was a mentor, a friend, and a moral compass for me and so many others. A universal spirit, Archbishop Tutu was grounded in the struggle for liberation and justice in his own country, but also concerned with injustice everywhere.

“He never lost his impish sense of humor and willingness to find humanity in his adversaries, and Michelle and I will miss him dearly.”

Prime Minister Boris Johnson also tweeted: “I am deeply saddened to hear of the death of Archbishop Desmond Tutu.

“He was a critical figure in the fight against apartheid and in the struggle to create a new South Africa – and will be remembered for his spiritual leadership and irrepressible good humour.”