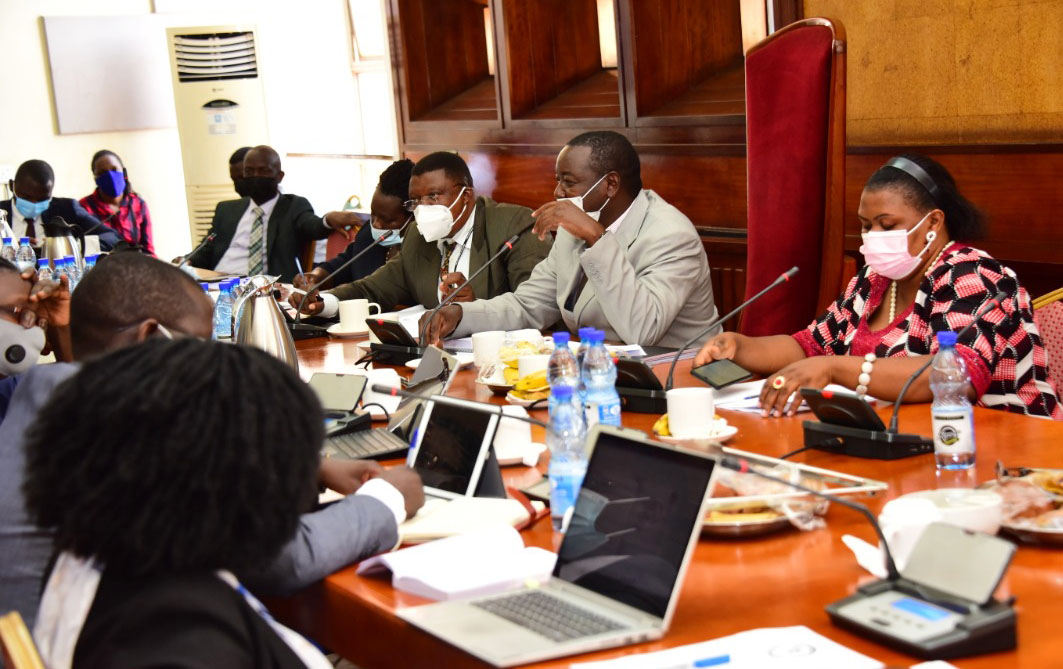 Parliament’s Committee on Environment and Natural Resources interfacing with officials from the Ministry of Energy and Mineral Development.
Posted on:
07 Dec 2021

The Parliamentary committee on Environment and Natural Resources has commenced scrutinising the Mining and Minerals Bill, 2021.

The Minister of State for Minerals, Hon. Peter Lokeris, on Tuesday, 7 December 2021 led a team from the Ministry of Energy and Mineral Development to introduce the long awaited Bill to the Committee for scrutiny.

While presenting the Bill, Hon. Lokeris also Chekwii East County MP, said the Mining and Minerals Bill, 2021 would repeal the Mining Act, 2003 which has become ‘inadequate’ and ‘obsolete’ in protecting and streamlining the mining sector in the country.

The Bill intends to cure the gaps unattended to by the current law [the Mining Act, 2003] by seeking to promote transparency of mining operations, organise, license, regulate and transform artisanal and small scale mining in Uganda and to create an enabling environment for attracting investments among others.

“Uganda is endowed with natural resources including valuable minerals such as copper, gold, iron ore and others, however, the sub sector continues to face challenges of low funding, institutional capacity to manage mineral resources, complex nature of artisanal and small scale mining, conflicts and environmental degradation despite the existing laws,” Lokeris said.

One of the clauses that the new Bill is introducing is the acquisition of licenses for building materials such as sand, murram, aggregate and clay etc, exploited for commercial purposes.

Under Article 244 of the Constitution of the Republic of Uganda, building substances are not regarded as minerals but Parliament has the mandate to regulate the exploitation of such substances.

According to the Minister, the new Bill will now require a person seeking to explore or mine or dispose of any building substance for commercial purposes to acquire a quarry license.

“These natural resources are for everybody but where these building substances are exploited for individual or domestic use then you do not need to pay anything. But if a person is exploiting sand on a large scale then it should be treated as a commercial purpose because you are also selling it to other people and therefore, must be treated as a mineral and subsequently taxed,” Lokeris said.

The Committee Chairperson, Hon Emmanuel Otiam Otaala (NRM, West Budama South County) wondered if the proposal would not lead to a constitutional amendment considering that building substances are not regarded as minerals.

Minister Lokeris responded in the affirmative, saying, Cabinet has approved the Ministry’s position on the same and that consultations are being made with the Attorney General.

The MPs asked the minister to present a holistic bill that caters for minerals that have not been discovered as well to avoid situations of continuous amendments of the law whenever a new mineral is discovered.

Whereas the Bill was well received by MPs on the committee, Hon Alex Ruhunda (NRM, Fort Portal Central) was worried that the Bill might erode government efforts to promote local content by instead empowering foreign companies.

“The bill restricts the locals as if these minerals are for foreigners. If we have this spirit [that suppresses local content] then it is extremely dangerous,” Ruhunda said.

He added, “In other countries, the indigenous have ownership of these minerals and if there is a foreigner coming in then the State ensures that the local investor has a big share because that revenue remains within the country. But the mindset I am seeing here is that we are restrained to make foreigners earn from our own wealth. Much as we need investors, we also need our people to benefit as much as possible.”

Hon. Moses Kamuntu (Indep. Rubanda County) called for ample time and extensive benchmarking with other countries that have all-inclusive and sufficient mining laws.

“The mining sector is very sensitive and has caused conflicts in countries where it is not handled properly. So, we need to consult widely and have enough time. We have minerals [in Uganda] but we have not developed the sector,” said Kamuntu.

Honourable Christine Kaaya Nakimwero (NUP, Kiboga District) was dissatisfied with government’s proposal to introduce competitive bidding on ‘first come, first served’ basis while applying for exploration license on grounds that it is gender insensitive and might disadvantage other vulnerable categories of people who are not privy to such vital information.

The Bill among others seeks to introduce the production sharing agreement system, set up a National Mining Company to handle the State’s commercial interests in the mining subsector and establish the Mineral Protection Force within the Directorate of Geological Survey and Mines to protect minerals against malpractices and enforce complianc