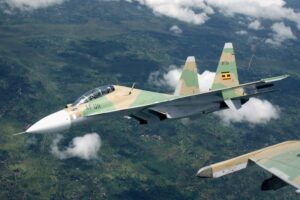 CONGO: The Uganda People’s Defence Forces (UPDF) together with the DR Congo military have launched joint air and artillery strikes against ADF camps in eastern Congo.

“This morning, we have launched joint air and artillery strikes against ADF camps with our Congolese allies,” she said, without giving details.

Over the weekend, DR Congo President Felix Tshisekedi had authorised Ugandan troops to cross the border and fight Allied Democratic Forces (ADF) rebels that have made a safe haven in the eastern part of the country.

Kampala blames the recent bombings in the country on ADF and according to sources in Kampala and DRC, discussions on the decision to attack the militant group are in advanced stages.

A DRC presidential adviser, speaking on condition of anonymity, was quoted by AFP news agency at the weekend as confirming the move.

“President [Felix] Tshisekedi has already raised the option of allowing Ugandan troops to enter Congolese territory to chase ADF terrorists together with UN troops,” the adviser is quoted as saying.

“We have been informed via our regular channels that President Tshisekedi has authorised Ugandan troops to cross the border to fight the ADF,” the source is quoted as saying.

Last week, Uganda’s Information and ICT minister Dr Chris Baryomunsi hinted on the move, telling a press conference at the media centre that the talks were progressing.

“Government is aware of ADF – Islamic State links. Yes, we know where they are, and we shall go and pursue them from where they are lying in their bed,” he said.

ADF, alongside a motley rebel and militia groups, is based in the mineral-rich North Kivu province and it has thrived due to lack of effective control by Kinshasa, according to experts familiar with regional security.

And ISIS claimed responsibility for the bomb blasts at Central Police Station (CPS) and Parliamentary Avenue, both in Kampala, which has cumulatively killed seven.